Ether price takes on Bitcoin — What’s behind the sharp rise in demand? 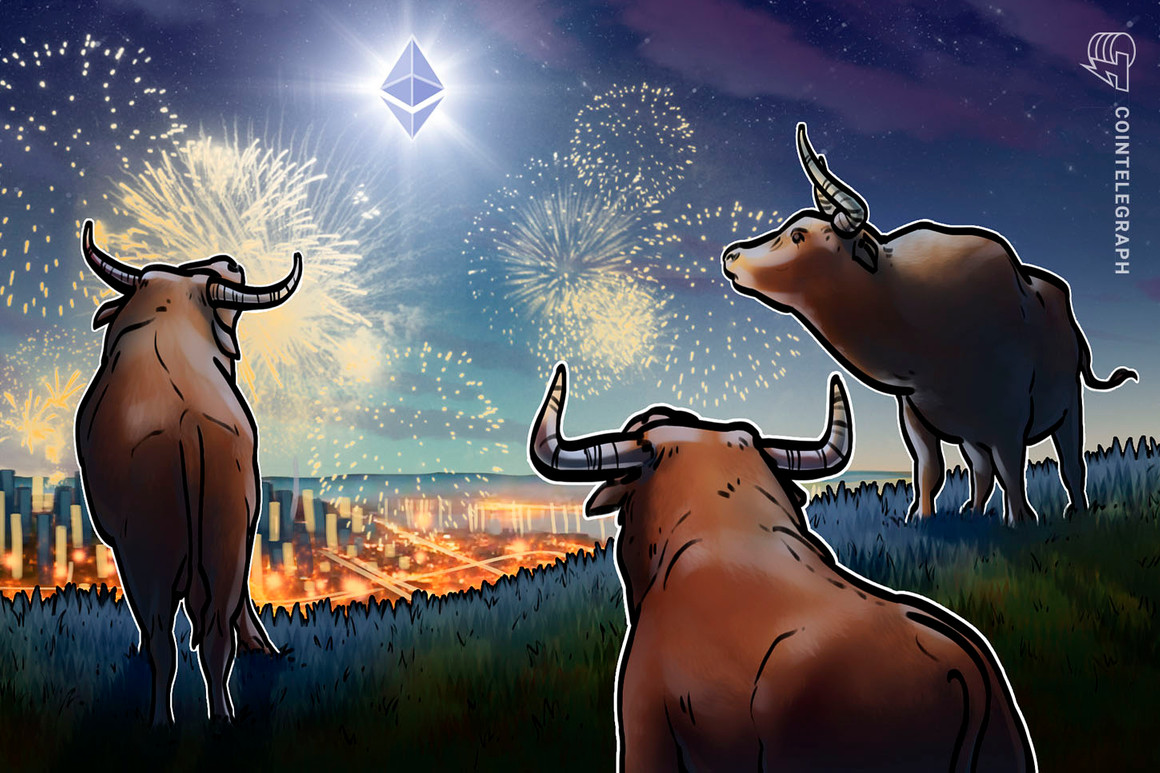 Breaking new all-time highs, the recent price action of Ether (ETH) took the crypto market by storm and signaled an official start to alt season. Several analysts are predicting that Ether will surpass its previous all-time high of $2,130 and continue to outperform Bitcoin in the foreseeable future.

Price predictions aside, Ethereum is undeniably leading the charge in crypto, being home to flagship decentralized finance and nonfungible token projects. However, this move comes at a time when the network is at a major crossroads.

Although many layer-one projects have been labeled as “Ethereum killers” over the years, Ethereum is only now facing real competition, which has come mostly from its scalability and congestion issues. If no solution is able to effectively scale the network, Ethereum may soon enough start losing ground to rival smart contract platforms.

Still, Ether is the undeniable king of altcoins, second only to Bitcoin (BTC) in terms of market capitalization. So, what factors are driving up the price of ETH, and is the competitive landscape shaping up to be a real threat to Ethereum’s dominance?

There is substance behind the hype, as there are increasing volumes for NFT sales and auctions as well as use cases being applied, especially in the gaming industry and art world. However, digital artists are not the only ones capitalizing on the trend and exploring the technology.

From celebrities like Logan Paul and Snoop Dogg to major sports powerhouses like Formula One and the NBA — and now even movie studios like Warner Bros. — all sorts of people and companies are using NFTs as a way to promote themselves and create alternative revenue streams.

NFTs are not just unique — they offer content creators verifiable ownership of their work and a fairer share of profits by cutting out middlemen. But despite their strong potential to disrupt various industries, NFTs are probably not the main driving force behind Ether’s recent move. Unbeknown to many in the crypto community, the prices of NFT collectibles have actually suffered a silent crash.

The Fed, interest rates and DeFi

While the NFT craze seems to be slowing down, DeFi, on the contrary, is once again breaking records. Due to the Ether price surge, the total value locked in DeFi protocols is now over $61 billion. Substantial gains are also observable in the number of transactions and in the valuation of DeFi tokens.

Just like Bitcoin is serving as a gateway for institutional investors to enter the crypto market, Ether is giving those same investors the opportunity to experiment with DeFi. Multiple venture capitalist firms and groups, such as the DeFi Alliance (formally the Chicago DeFi Alliance), have already made audacious investments in the DeFi industry.

The number of institutional investors flocking to DeFi is only expected to grow, helping bring liquidity, reduced volatility and increased credibility to the industry. Many DeFi projects are already developing solutions catered to institutional investors, offering risk management tools and other institutional-grade services — similar to traditional finance — in order for these companies to be able to hedge their positions and minimize risk.

Justin Wright, chief operating and financial officer of investment platform Yield App, told Cointelegraph: “The days of a real return on cash are long gone,” especially given the recent announcement by the United States Federal Reserve that it will not be hiking interest rates. He further added:

“Interest rates at mainstream banks are now very close to zero. This means that when you take inflation into account if you save in traditional fiat currency assets or cash with a brick-and-mortar bank, you are losing money.”

Wright believes that the only place to earn meaningful real returns on dollar-pegged assets is in decentralized finance, which is predominantly situated on the Ethereum blockchain. In DeFi, users of limited means and experience can earn double-digit returns on USD Coin (USDC), Tether (USDT) and other stablecoins that are backed by and pegged to the U.S. dollar and, as such, do not suffer the volatility of many of the headline cryptocurrencies.

In addition, DeFi users can earn rewards in a platform’s native currency, allowing those saving in stablecoins to gain exposure to some of the higher-growth areas of DeFi without putting down any capital at risk. This makes DeFi hugely attractive for savers and alternative investors who have been starved of interest for well over a decade.

Interoperability-focused blockchains like Polkadot and Cosmos are becoming increasingly vital to the crypto ecosystem. Together with layer-two solutions, they are able to offer some relief to Ethereum’s extremely clogged network. But these solutions, at least at this point in time, only seem to offer a bandage to the wound rather than fix the issue.

On the other hand, the upcoming Ethereum 2.0 upgrade holds the potential to effectively scale the network and bring forth greater decentralized application and DeFi adoption. However, only Phase 0 has been launched, and the upgrade has faced so many delays in the past that it has become a meme.

The Ethereum network has reached a state of exclusivity. It seems like it has become affordable to whales and rich investors only, pricing out regular users. In order to make a simple transaction or deploy a smart contract, users are required to pay obscenely high fees.

This has led a large portion of crypto developers and users to shift to other blockchains, with Binance Smart Chain coming out as a prominent competitor to Ethereum. Various decentralized exchanges, such as SushiSwap, are now also deploying contracts on BSC and other networks as a way to circumvent high fees and offer a more affordable service to traders.

Although many projects are exploring alternatives and some predictions suggest Ethereum could lose a large portion of its NFT market dominance to BSC, it seems that the Ethereum network effect is still too strong. Projects will not be moving away completely from the Ethereum blockchain anytime soon, as it still has the most developer and user activity by far.

Maximalists believe the Ethereum blockchain will be the only smart contract platform the world needs. However, the popularity of interoperability solutions illustrates quite the contrary, suggesting that it’s increasingly more likely that we will see a multichain future where various connected blockchains can be used interchangeably.

Following Tesla’s $1.5 billion Bitcoin purchase, which turned a lot of heads in the crypto community, it should come as no surprise that more companies are looking to diversify and take long positions on Ether. According to a Coinbase report, institutional investors now recognize Ether as a potential store of value, similar to Bitcoin.

Although it seems that crypto has only recently cemented itself as an institutional asset class, the truth is that many Fortune 500 companies already invested in Ether almost a year ago. According to research, several Ethereum wallet addresses belong to large corporations such as JPMorgan Chase, IBM, Microsoft, Amazon and Walmart.

It’s entirely possible that big institutional investors already own Ether but haven’t made it public yet. Tesla did just that, only announcing its Bitcoin investment roughly a month after making the move. With Grayscale continuing to grow its Ether trust and large corporations continuing to stock up on Bitcoin and Ether, it’s clear that institutional money is one of the factors behind the latest price rally.

Where is ETH heading?

The current price rise is not the result of a single event, rather it stems from the development that has occurred throughout the years. However, there is no denying that the influx of institutional money, coupled with the launch of CME Ether futures in February, has been instrumental to ETH’s performance in this bull market.

Additionally, Visa’s announcement that it will allow partners to settle transactions on Ethereum and the current low supply of Ether on exchanges have played a part. After hitting a 28-month low, the lack of ETH supply on exchanges is not only driving up the price but may also be a potential sign of an institutional accumulation.

There is also a strong overall bullish sentiment around Ether at the moment. This is best reflected by the testimony of renowned investor and crypto whale Mark Cuban, who hailed Ether as being “as close as we have to a true currency.” But where is it all headed from here?

Anton Bukov, co-founder of 1inch Network, believes that multichain may be the key for the future of DeFi and NFTs. If that’s the case, competition may be essential for the survival of Ethereum along with the wider crypto space. He told Cointelegraph: “From the beginning Ethereum was the cradle for DeFi, but nowadays more and more projects are exploring opportunities to expand and to have a presence on multiple chains.” He added:

“Projects are now forced to follow their users, as we see Binance Smart Chain has a very strong trend of growth of wallets number and transactions. In addition, some blockchains started to work on decentralized bridges.”

Phase 1 of the Eth2 upgrade is scheduled for release this year and will introduce the concept of shard chains. This crucial update, coupled with the multiple layer-two and interoperability solutions being developed by other projects, is set to significantly improve the scaling of the Ethereum network.

Along with the promise of scalability and lower gas fees for transactions and smart contracts, Eth2 also brings along with it the ability for users to stake their Ether and to earn rewards from doing so by running a node or joining one of the many staking pools available, or even by going through a centralized exchange like Binance or Kraken.

Eth2 staking may also be one of the factors driving up the price of Ether. More than $7.7 billion worth of Ether has been staked so far. Not only does this lock up supply, but the high annual percentage yields for staking may also be driving demand.

Another proposal, EIP-1559’s fee-and-burn mechanism, will make Ether far scarcer and more valuable if approved. The Ethereum Improvement Proposal aims to introduce a base fee that will be burned when a transaction takes place. Miners would still receive a tip for validating transactions, but their earnings are set to decrease. While the proposal aims to get the skyrocketing gas fees under control, it can also be seen as a bullish sign for Ether, given that it would reduce its supply.