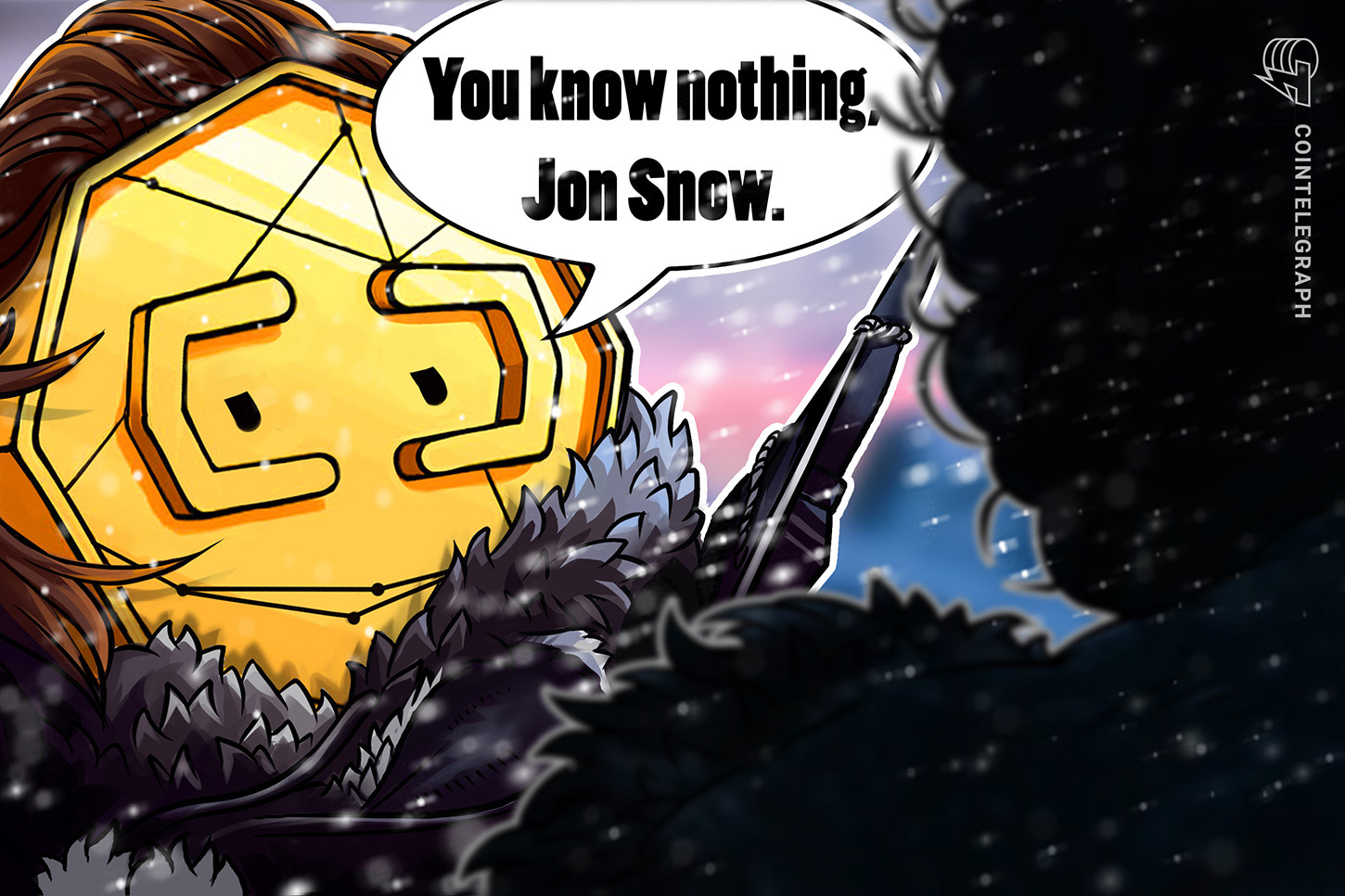 As anyone following the crypto industry will have noticed, yes, Bitcoin (BTC) did recently smash its previous all-time high of around $20,000. Now, many analysts anticipate the cryptocurrency to eventually rise to the mid-$30,000s or even higher within the next few years.

As things stand, BTC is trading at around $23,300, briefly testing the $24,000 mark on several occasions. However, despite all of these positive developments, many prominent individuals from the financial mainstream have spoken negatively about the crypto industry, using cliche adages — such as “crypto is for criminals” and “crypto is all hype, no substance,” etc. — to describe BTC and other prominent digital currencies.

For example, renowned economist and financial strategist David Rosenberg recently referred to Bitcoin as a “massive bubble,” propping up the argument by saying that the supply curve of Bitcoin is unknown even though some people claim to know otherwise. Similarly, Mark Cuban, who is generally quite open-minded in regard to various futuristic technologies, also bashed Bitcoin, claiming that it is “more religion than solution.” However, he did concede that despite its shortcomings, it may be useful as a store of value.

And while crypto tech is far from perfect — admittedly being many years away from replacing legacy financial instruments such as fiat — the aforementioned opinions may seem to come across as the ramblings of annoyed traditionalists who fail to see the immense potential of the technology.

As soon as Bitcoin broke the $20,000 mark, it was inevitable that analysts from across the board would seek to use the “this bull run is the same as 2017” argument to undermine the financial traction being gained by the industry as a whole.

In this regard, “CryptoYoda,” an independent cryptocurrency analyst, pointed out to Cointelegraph that one can see that the fearful perspective provided by the financial mainstream stems from a lack of understanding of the technology. As such, he believes that what is happening right now is a shift from debt-based fiat currency to trustless financial systems:

“What has changed? Everything. While the 2017 bull run was largely driven by early adopters and retail, this bull run is being dictated by institutional players entering the market. […] As of now, institutions buy a multiple of what is being mined per day. When one institution accumulates 500MM in BTC, it means that 500MM is no longer available for the other key players observing the market for entry.”

In a similar line of thinking, Jason Lau, chief operating officer of OKCoin, told Cointelegraph that it’s safe to say that the long-looming promise of mainstream players entering the crypto space has finally been fulfilled. In his view, this ongoing bull run has been driven by traditional financial institutions buying Bitcoin price dips as an investment and treasury product: “They have a long term strategy for these assets. So with increased demand, HODLing, and fewer block rewards due to the recent halving, the price may have no limits.”

Additionally, another major difference between the ongoing cycle and the one witnessed before is that back in 2017, the industry was in the midst of a feverish initial coin offering craze, with the bubble duly bursting within just a few month’s time, resulting in the entire crypto economy crashing almost overnight.

According to Adam Neil, chief marketing officer of Bitrue — a digital-asset management platform — these days, people in crypto are much more pragmatic, adding: “Publicly-listed companies like MicroStrategy and PayPal have come on board, and the growth of the CME Bitcoin Futures market indicates increased demand for regulated exposure.”

Crypto can’t, and shouldn’t, be compared to traditional financial mediums

It is no secret that despite its bullish outlook, a certain degree of uncertainty in regard to BTC’s value still exists, as was made clear in November when the price of the flagship cryptocurrency dipped by $3,000 within a span of just 24 hours. That being said, it is unfair to compare BTC, which is just over a decade old, to legacy systems that have been around for more than a hundred years.

So, it’s worth exploring the true meaning of the term “safe haven,” especially as the world struggles with COVID-19-induced financial destruction. CryptoYoda believes that while precious metals like gold and silver certainly are tangible stores of value, they are not very practical — i.e., they are difficult to store, transport, secure, etc. He added:

“I will always remain an advocate for precious metals as they are the ultimate stores of value and have been an accepted form of money for hundreds and thousands of years. It is difficult to store it all in Gold, and then it still needs to be protected and cannot be easily moved.”

Neil believes that while it may not be fair to compare Bitcoin to traditional stores of value, in recent times, the world’s leading cryptocurrency appears to be shouldering that expectation quite well. In his view, the digital-gold narrative is incredibly strong within the community, with a lot of people truly believing in the technology and actively working to make Bitcoin more valuable, whether by running nodes, mining, writing and reviewing code, or HODLing it.

Additionally, it’s also important to recognize how far Bitcoin has come in relation to various legacy financial systems, with an increasing number of mainstream investors now looking to enter the domain. Providing his insights on the matter, Yoni Assia, founder and CEO of eToro — a social trading and multiasset brokerage company — told Cointelegraph that crypto is no longer just the domain of computer programmers and fintech advocates, adding: “We expect this to continue into 2021 as fears of inflation continue to creep up globally.”

Crypto is not perfect, and that’s fine

While crypto stands to completely redefine the way in which the global financial ecosystem works, it still faces many pertinent issues that need to be ironed out. For example, over the first 10 months of 2020 alone, losses from cryptocurrency thefts, hacks and frauds amounted to a whopping $1.8 billion, according to blockchain forensics company CipherTrace. The company even suggested that 2020 was on track to record the second-highest value in losses linked to crypto crimes, exceeding $4.5 billion.

Furthermore, due to regulatory uncertainty, crypto continues to be used by certain sections of society as a means of tax evasion. For example, the United States Justice Department recently indicted John McAfee, an antivirus software creator and crypto proponent, accusing him of tax fraud worth millions of dollars linked to his crypto proceeds between 2014 to 2018. Furthermore, CryptoYoda believes that in its current state, the industry is far from perfect, adding:

“Scalability is a major issue. Similarly, state-level attacks pose another major risk, with such issues most likely rising as the industry grows from strength to strength. While the technology in itself is positioned well for such attacks, individuals are not. The greatest risk I see in this market is the forcing of KYC on every exchange and individual, which undermines the promise of cryptocurrency.”

That being said, fiat currencies are also used by criminals; however, in such scenarios, the “fiat is for criminals” argument is never drawn out. For example, according to a recent BBC report, HSBC allowed tech-savvy scamsters to transfer millions of dollars around the world even after it had learned of their ploy.

The leaked documents claim HSBC moved around $80 million through its U.S. business to its accounts in Hong Kong between 2013 and 2014. What’s even more surprising is that the endeavor kicked off right after the banking institution was fined a whopping $1.9 billion in the U.S. over money laundering charges. Other reports have also suggested that banks such as JPMorgan Chase and Standard Chartered have too been implicated in moving some $2 trillion of “dirty money” between 1999 and 2017.

So, it seems that both the traditional and crypto worlds only manage to see the speck in their brother’s eye but not the log in their own. Furthermore, since there are fewer well-known advocates for crypto in comparison with traditional finance, it’s of no surprise that the aspiring blockchain sector is losing out on the media spin war. As a result, many common misconceptions continue to seep into the consciousness of the masses, ultimately damaging the perception and delaying the adoption of the technologies.