Bitcoin (BTC) has been on a tear and there’s no escaping it. But the majority of high-cap altcoins are seemingly suffering at the hands of this bull run, leading to the question: have we had our altseason already? Is it over or is there more to come? 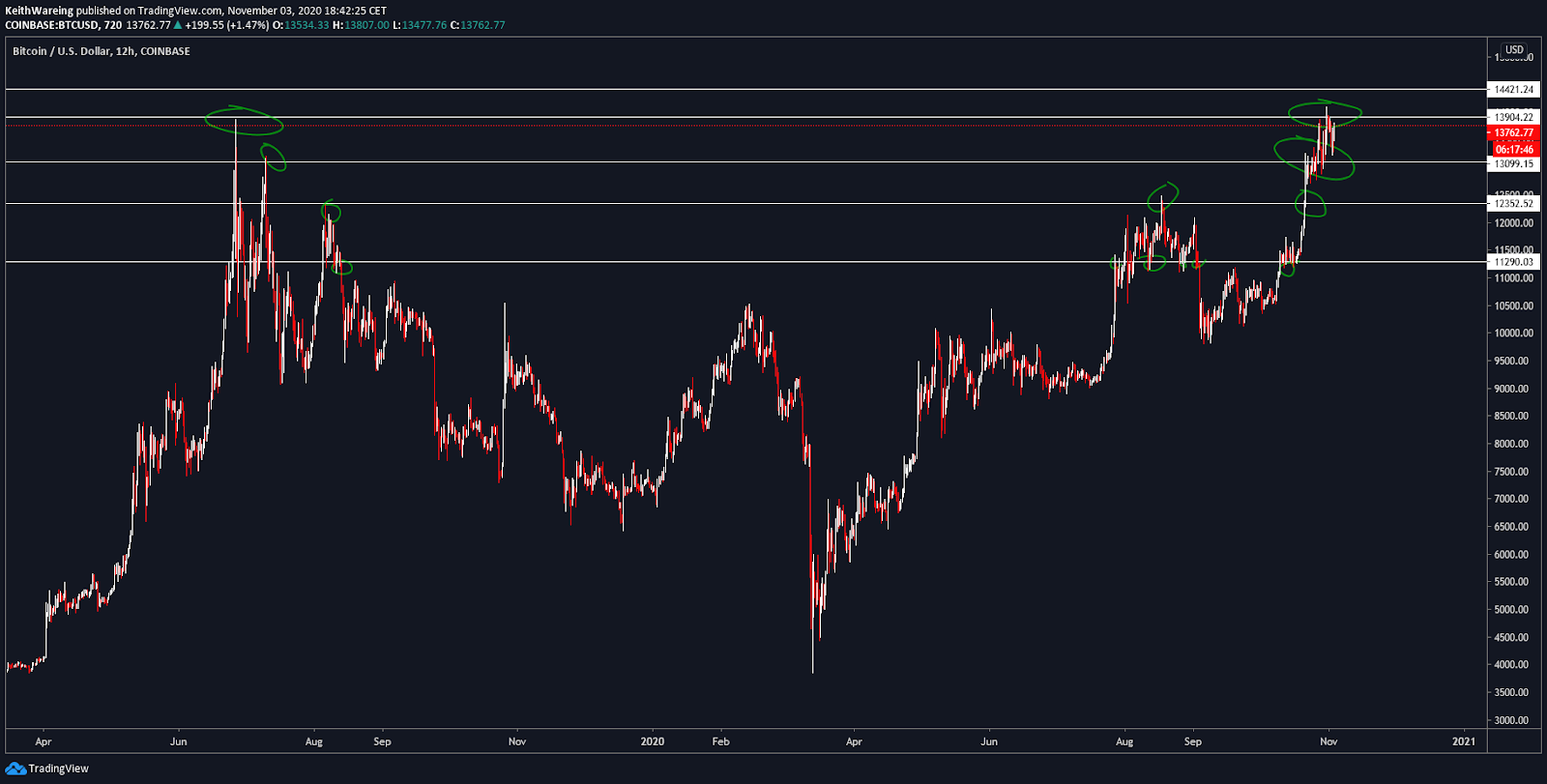 Bitcoin has been eating up multi-year resistance levels like Pacman on an amphetamine-induced rampage lately, smashing through $11,300, then $12,400 then $13,100 before being rejected around the $14,000 level.

After $14,400 there isn’t much in the way of resistance until $17K before a new all-time high can be printed for the king of cryptos. But the question is can Bitcoin run out of steam?

Well the BTC dominance has been on a massive rip since September, suggesting that altcoins are being sold off to pile into Bitcoin to push past this last major level of resistance. 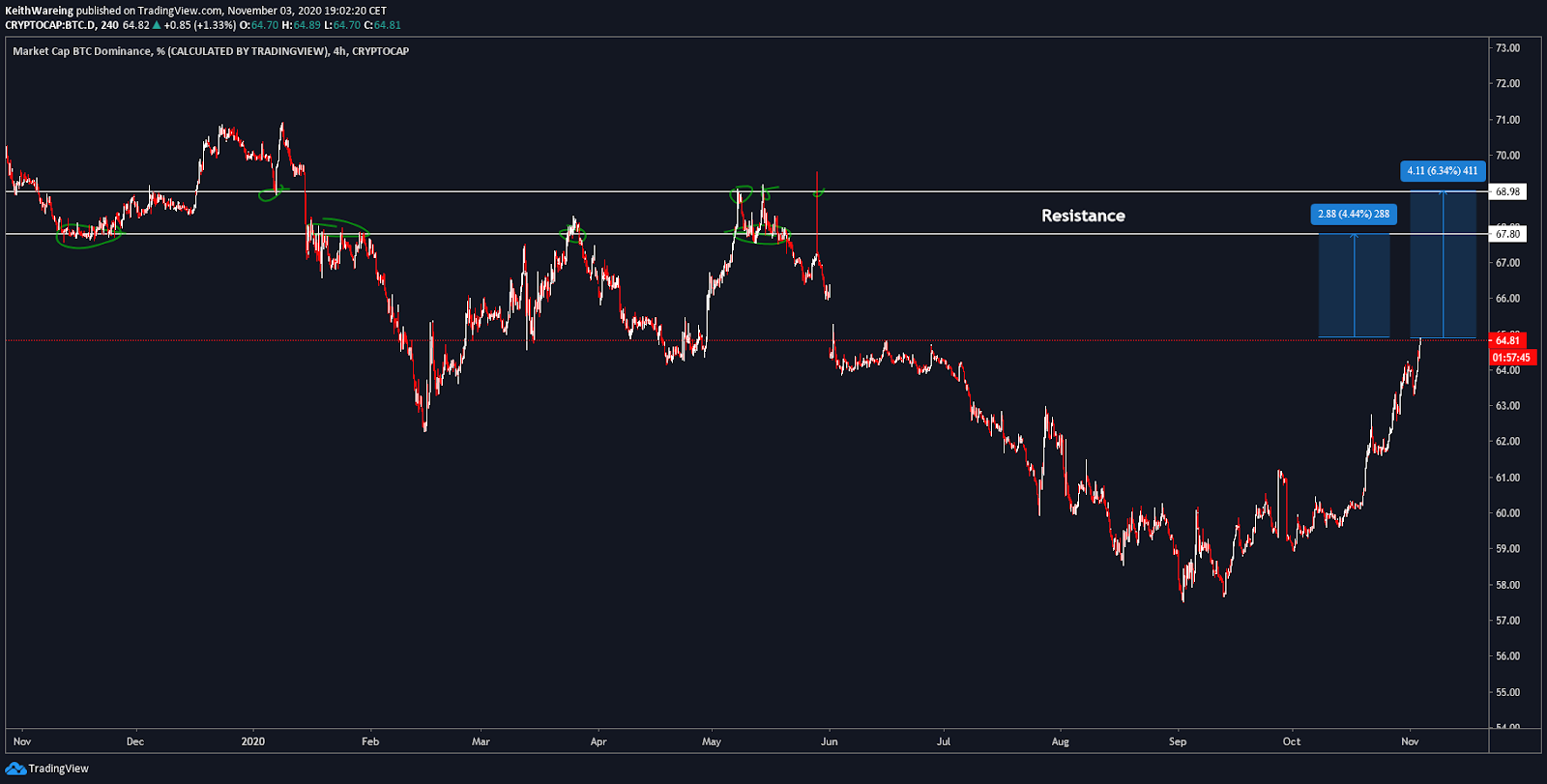 These numbers may seem small, but the adverse effect this has on major altcoins is crippling bag holders of some of the most popular projects in the space.

Chainlink about to plunge back into single digits 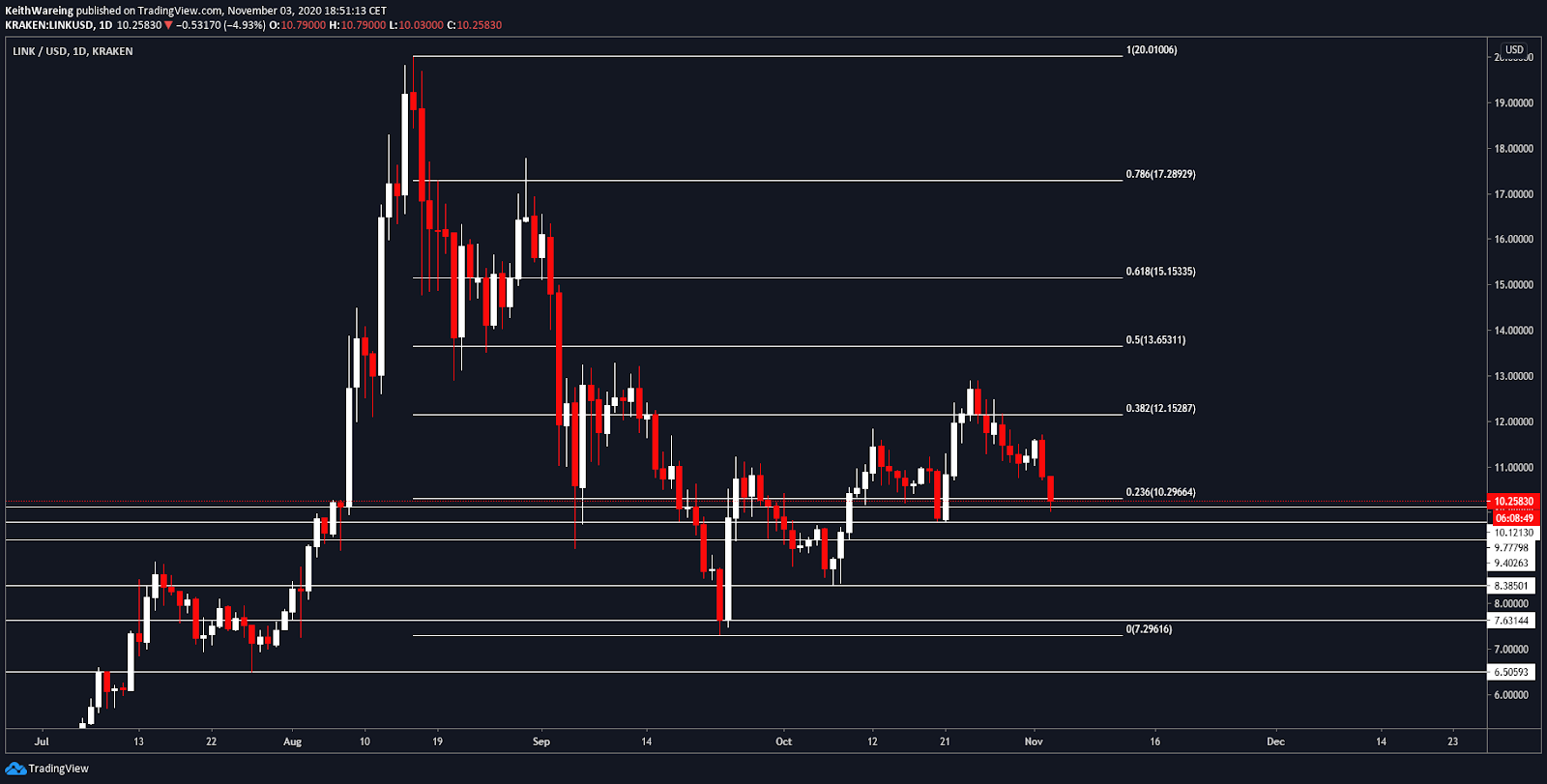 It was only a few months ago that people were cheering for Zeus Capital to get liquidated in a $20m short when LINK was trading under $10. The price pulled a similar stunt to Bitcoin in December 2017 by rocketing past the expected $10 price and overshooting all the way up to $20 before correcting.

The most recent bounce price for LINK was around $7.50. If that figure shows its face again, I think the “marines” will start to lose their love for their beloved LINK as a price of $6.50 looks more likely by the day based on previous support and resistance levels.

The whales are likely in the know too, as 400,000 LINK was sent to Binance earlier today.

If we cast our minds back to what happened to Bitcoin at $20K, it’s taken a good three years to start to return to those levels. So the smart money could be piling out of coins like LINK to load up on Bitcoin before the next big leg up.

I’ll be watching this closely to see where it bottoms. But for now, it seems another large altcoin may have already done so, which could pave the way.

ETH price may have bottomed 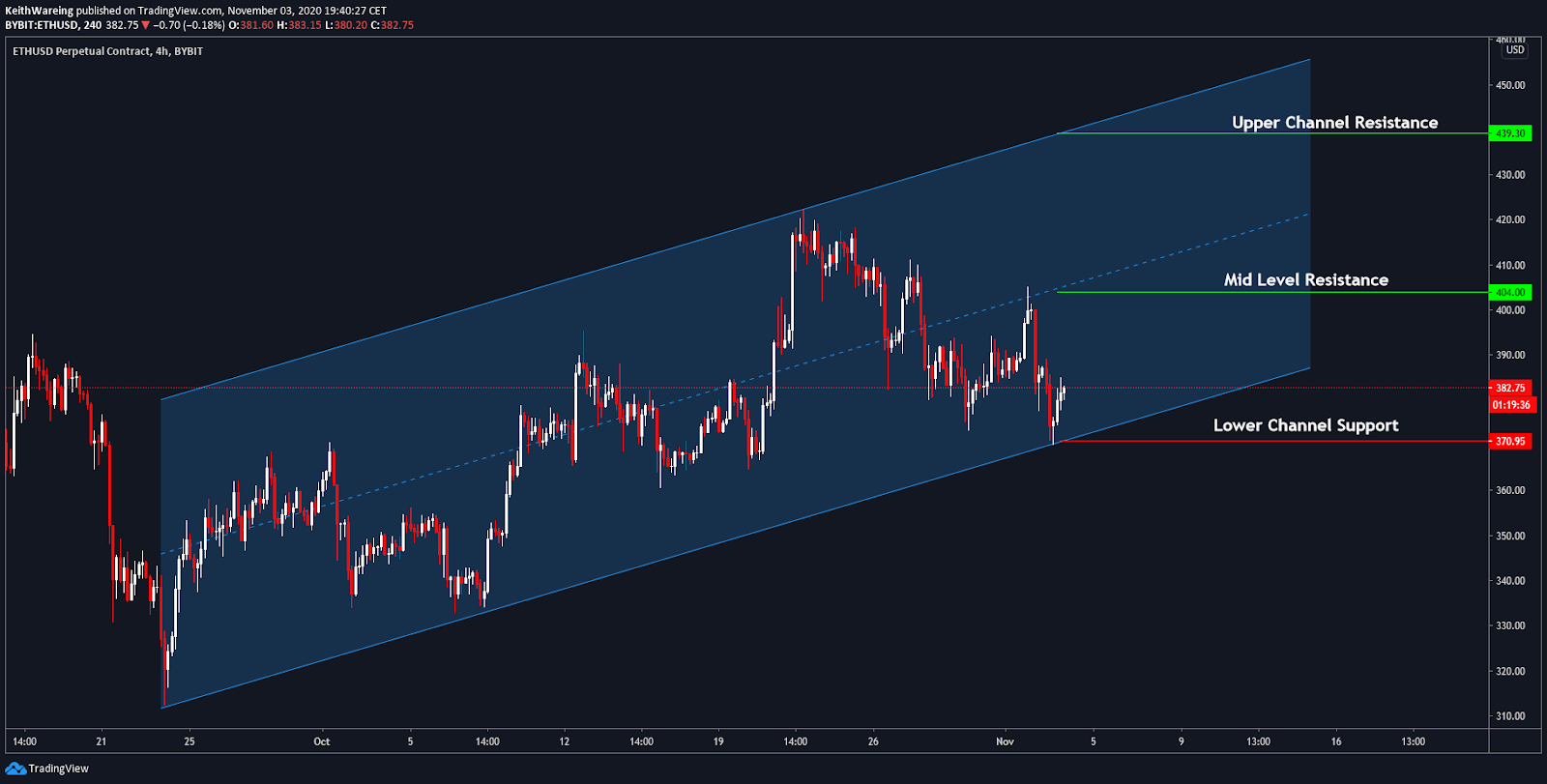 I’ve seen a lot of people calling for $300 ETH in the short term, but I personally don’t see it. In fact, it seems Ether has continued to print higher lows since the end of August and has been ranging nicely in an ascending channel.

The support of the channel has remained intact for several months and held at $370 after its rejection at $400. Should this pattern continue and break past the mid-level resistance around $400, then I expect a clear run to $440 in the near term.

Should Ether lose the lower channel support, I’d expect there to be support at $350 and $310, which represents the 0.236 and full fib retracement levels that are shown below. 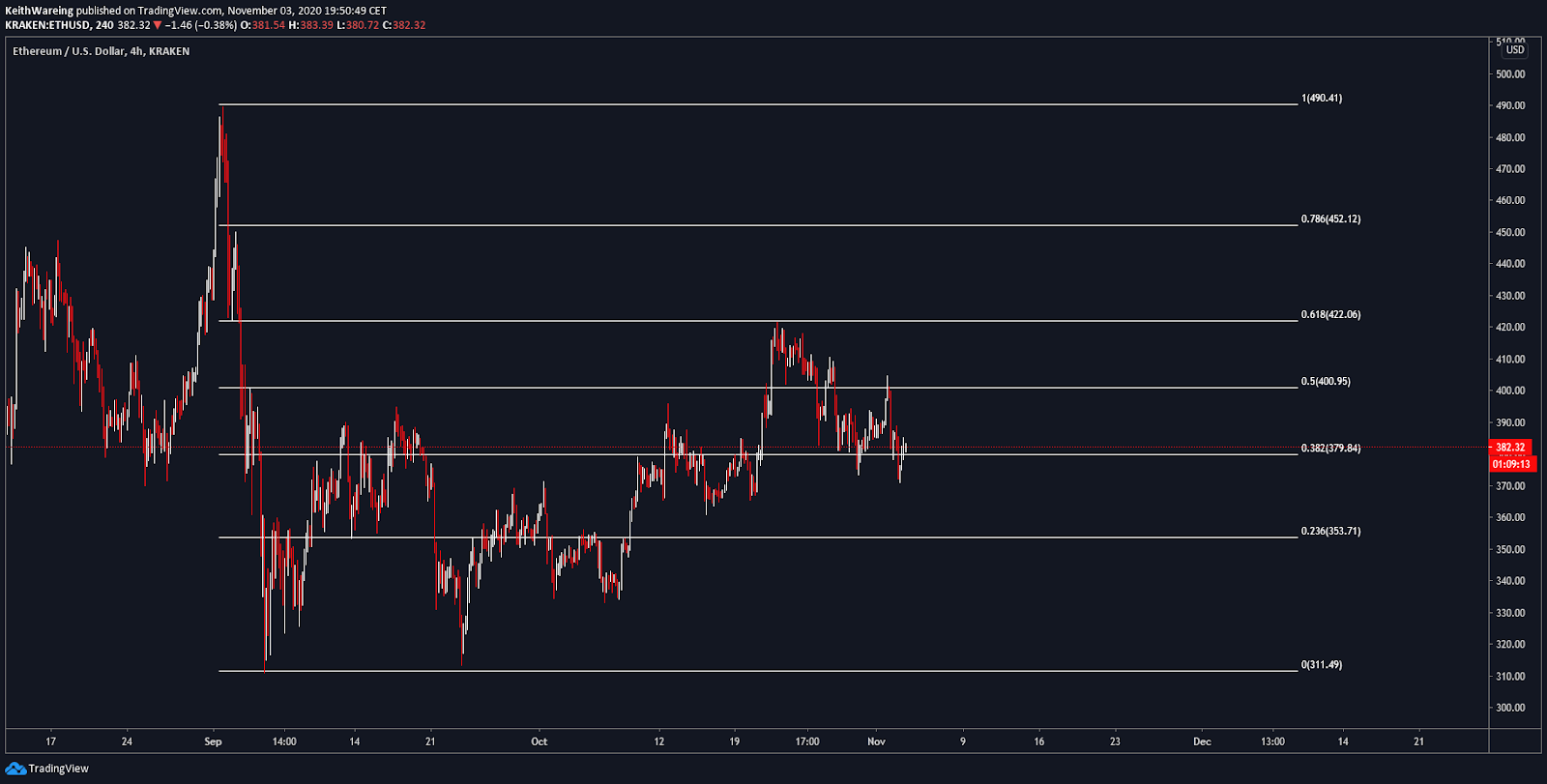 3 key levels to watch for a Bitcoin breakout 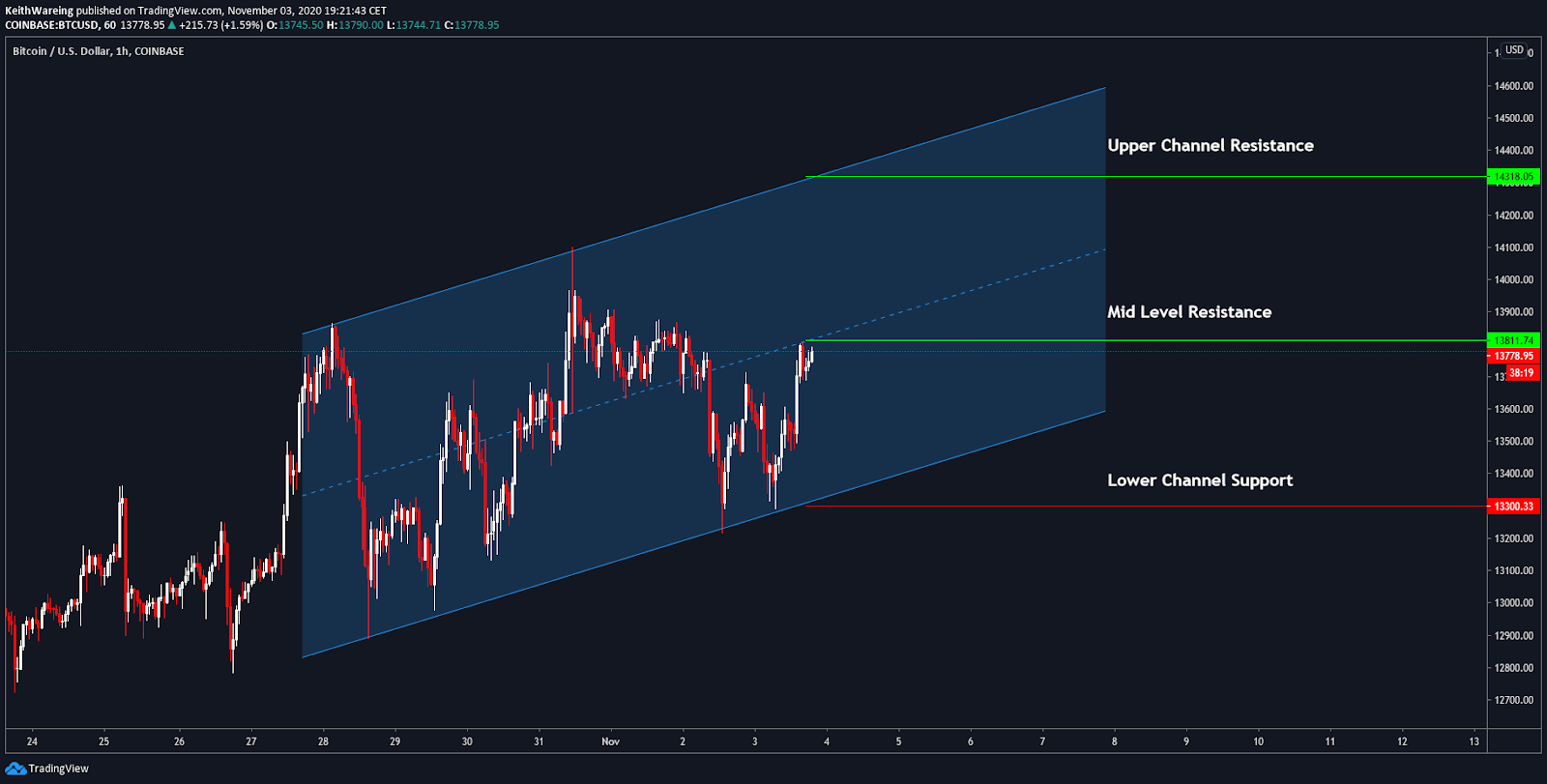 Similar to Ether, Bitcoin is also currently trending in the lower part of an ascending channel with three levels to be aware of: 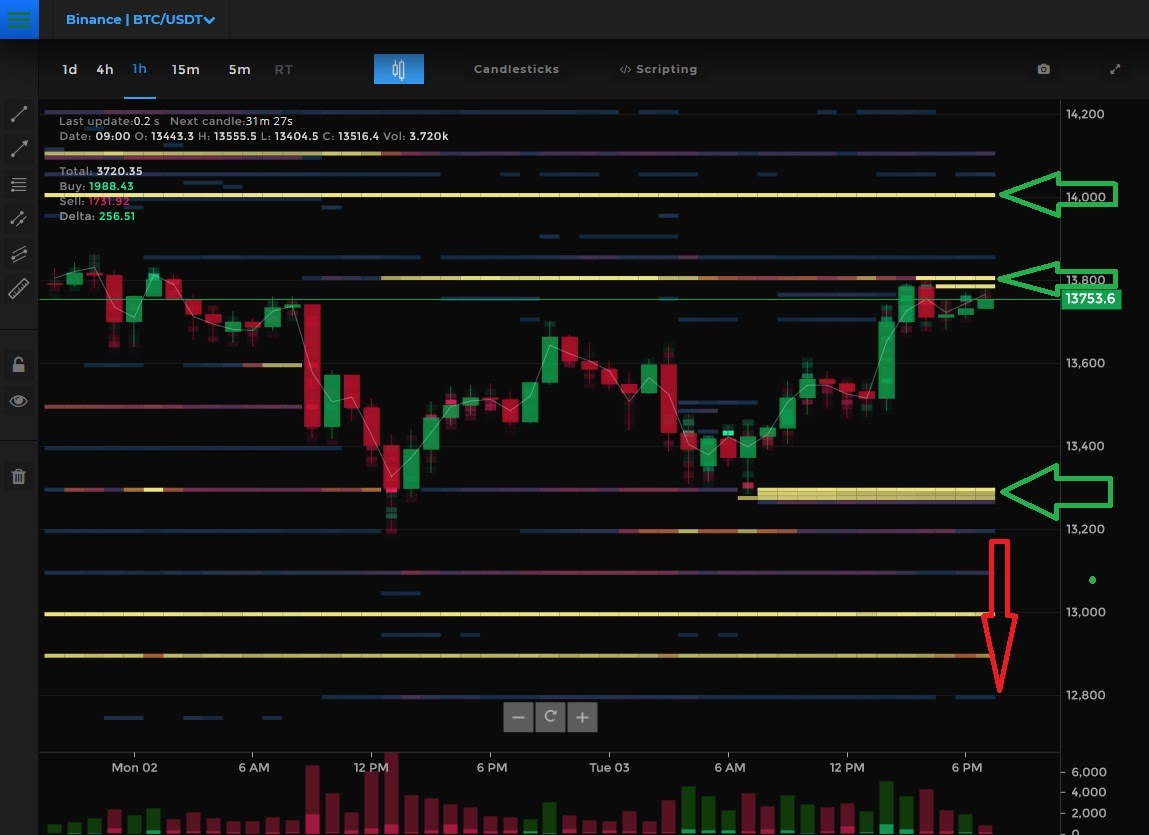 The picture for the ascending channel is supported by orderbook heatmap data from Binance, showing a triple layer buy-wall at the lower channel support level, followed by some weaker sell-walls at the mid-level resistance level and upper resistance levels of $13,800 and $14,000, respectively.

What concerns me about this data is that I have seen a big triple block on a heatmap before, and it vanished as it was hit, tricking knife-catchers into longing what looks like solid support when in fact there’s layered buy walls all the way down to $12,800.

If I were a whale, I would probably be playing a similar game of casting uncertainty to afford me time to unload my heavy bags of altcoins into BTC, and the last 48 hours there’s been a lot of heavy bags flagging up on whale alerts suggesting that this could very well be happening.

This includes the $400m in Tether flowing to Huobi. Something is brewing, and I’d like to think it’s bullish for Bitcoin.

The bearish scenario for Bitcoin

I fully expect Bitcoin to pull back to around $13,300 in the very short term. If this level fails to hold, the last level of meaningful support I would expect to see is $12,800.   Should we lose $12,800, I would look to reevaluate my bias from bullish to bearish.

The bullish scenario for Bitcoin

Closing above the mid-level resistance of around $13,800 would be considered bullish. From here, the last level of resistance to clear would be that $14,400 area to confirm that we’re going to $17,000 very soon.

The views and opinions expressed here are solely those of @officiallykeith and do not necessarily reflect the views of Cointelegraph. Every investment and trading move involves risk. You should conduct your own research when making a decision.

Is this the most annoying — or valuable — man in DeFi?