Exploring the landscape of crypto regulations in sub-Saharan Africa

Sub-Saharan Africa has no doubt suffered many regulatory setbacks in adopting cryptocurrencies. With most countries in the region struggling not to buckle under economic uncertainties and pressures looming over them even as the ripple effects of COVID-19 set in, it would appear that many Africans, especially millennials, aren’t waiting for the government anymore.

The main issue inhibiting regulation seems to be a combination of resistance and indecision both from regulators, which has majorly been a result of little or no understanding of cryptocurrencies.

Speaking to Cointelegraph on the attitude of regulatory bodies in Africa toward cryptocurrencies, Andrew Nevin, partner and chief economist at PricewaterhouseCoopers Nigeria, said:

“I think it’s fair to say that around the continent, people are being cautious. There’s been a lot of problems with cryptocurrency and various kinds of fraud: initial coin offerings and projects that didn’t have sufficient value and have gone backwards or folded up. So, I think that the authorities are taking the right view in taking this step by step.”

For the most part, governments of most sub-Saharan countries have not taken any clear stance toward cryptocurrencies.

Many African governments pretty much don’t know what to do about cryptocurrencies, although recently, there has been some progress. For example, the Securities and Exchange Commission of Nigeria has officially defined digital assets under its regulatory umbrella in a recent statement. Before, the Nigerian Central Bank had flip-flopped, going from warning its citizens against doing business in digital currencies to launching research on potential policy proposals. In Kenya, authorities have gone from comparing cryptocurrencies to pyramid schemes to setting up a task force to study the challenges and benefits associated with the underlying blockchain technology.

Over the years, the legality of Bitcoin (BTC) and other crypto assets has varied significantly across the region, with over 60% of African governments yet to make their position known. 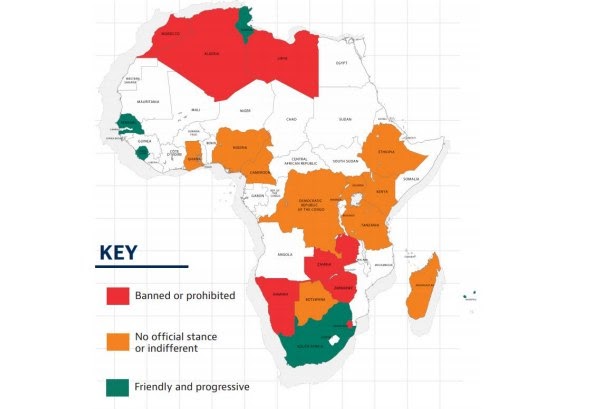 While some nations have openly declared their support for cryptocurrencies, most countries have either issued complete or partial bans. The most common position, however, is one of caution. Countries such as Kenya, Ghana, Lesotho, Swaziland, Uganda, Zambia and Zimbabwe have warned its citizens about cryptocurrencies without actively banning crypto trading or use. Other countries such as Namibia and Burundi, while also not banning usage, have issued bans against trading, citing lack of consumer protection.

Similar to what we see in Kenya, a statement from the Ugandan government referred to “One Coin Digital Money,” as a cryptocurrency alongside Bitcoin, Litecoin (LTC) and XRP, among others, putting them all on equal footing as cryptocurrencies. OneCoin was a notorious multilevel marketing scheme that allowed “representatives” to earn incentives from selling memberships for an enterprise with no genuine product.

Taking a critical look at these countries, we could infer that Ponzi schemes have tainted the reputation of legitimate crypto projects and may be slowing things down. Paxful CEO Ray Youssef spoke with Cointelegraph on the subject. Paxful is a leading peer-to-peer crypto exchange platform that has the highest growth of P2P trading in Africa so far by providing on-ramps and off-ramps for cryptocurrencies within the region:

“We ought to understand that regulators are just starting to figure cryptocurrencies out. Many of them have just begun their exploration and they hear about this in the worst possible ways, especially in Africa. Because nine out of 10 people you talk to in Africa have been scammed in a cryptocurrency-involved scam or know someone who has been scammed. That’s a huge number, but then you consider the proliferation of multi-level marketing scams that operate upon Africa like OneCoin, this infamous Ponzi […] plus the crypto mining scams. Everyone in Africa has been scammed.”

Youssef also added that corruption ranks as one of the factors slowing down the regulation of cryptocurrencies within the region:

“Unfortunately in Africa, things are a little different from in the West. Everyone wants to wet their beak a little bit at the table, and that’s how regulators think […] and that’s a challenge for people in the African crypto space.”

Despite the regulatory weakness, it has become obvious that the region has seen a continuous increase in interest in cryptocurrencies. Countries such as Nigeria constantly rank first in online searches for “Bitcoin” as seen on Google Trends. A Sept. 10 blockchain analytics report from Chainalysis indicates that Nigeria, South Africa and Kenya cumulatively lead the continent in monthly crypto transfers, which totaled $316 million in June.

Africa’s interest in crypto could also likely be fueled by factors, such as worsening inflation, high remittance fees, low financial inclusion and political instability, among other factors, which, in turn, have made things difficult for the average person in sub-Saharan Africa. These would hasten the decisions of regulatory bodies in the future.

Inflation rates across the continent have historically been much higher than the global average. An extreme example would be Zimbabwe’s hyperinflation, which led Zimbabweans to a desperate search for a store of value even as the pandemic has increased economic uncertainties. 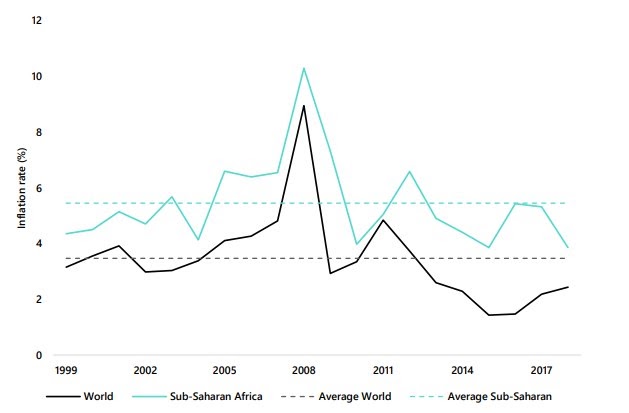 This is another factor that could hasten the decision of regulators, as they already have a growing market. According to a report from the World Bank, remittances worth less than $200 to sub-Saharan countries cost an average of about 9% compared to a global average of 6.8%, while payments between countries cost even more. For example, sending money from South Africa to Zambia costs 18% of the value of the money sent.

Not only does political instability exacerbate inflation and currency volatility, but it can also result in forced migration, GDP collapse and wealth confiscation, all of which lead to an intensified search for sound money to preserve wealth. This increased attention would, in turn, hasten the hand of regulatory bodies to make a decision. According to data from the World Bank, just 10 of Africa’s 53 nations have a positive score on the political stability index. 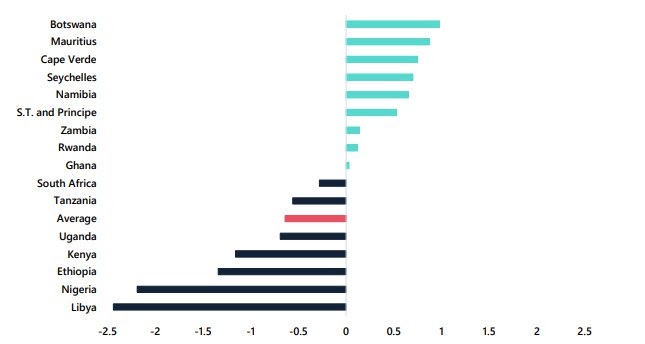 Source: The World Bank and The Global Economy

The challenges of hyperinflation, high remittance fees and economic instability are more pronounced in sub-Saharan Africa than other parts of the world. These issues put more financial pressure on the average citizen — pressure that makes regular people search for options for a safer financial future. Faster response from regulators can, therefore, be linked to the astonishing increase in the people showing interest in cryptocurrencies, which are now seen as an escape route from the harsh realities facing most Africans.

In a recent report, the Securities and Exchange Commission of Nigeria officially issued regulatory guidelines for digital currencies and crypto-based companies or startups. According to Nigeria’s capital market and investment regulator, the aim is to protect investors and create standards for ethical practices. The commission also added that it will regulate “all Digital Assets Token Offerings, Initial Coin Offerings, Security Token ICOs, and other Blockchain-based offers of digital assets within Nigeria.” Every crypto asset in Nigeria will be treated as securities unless the company or startup can prove otherwise. This development is a far cry from what was obtainable before now.

In 2017, the commission had taken a more antagonistic approach. It warned citizens to be cautious while investing in cryptocurrencies, as they might experience “financial losses” without guaranteed protection from the regulatory body. That same year, Nigeria’s central bank warned local banks against doing business in digital currencies. Meanwhile, the increasing adoption of cryptocurrencies in the country has brought with it a rise in bad actors seeking to exploit unsuspecting citizens.

However, it’s likely that interest in crypto from its citizens may have driven Nigerian regulators to latch on to this budding market. 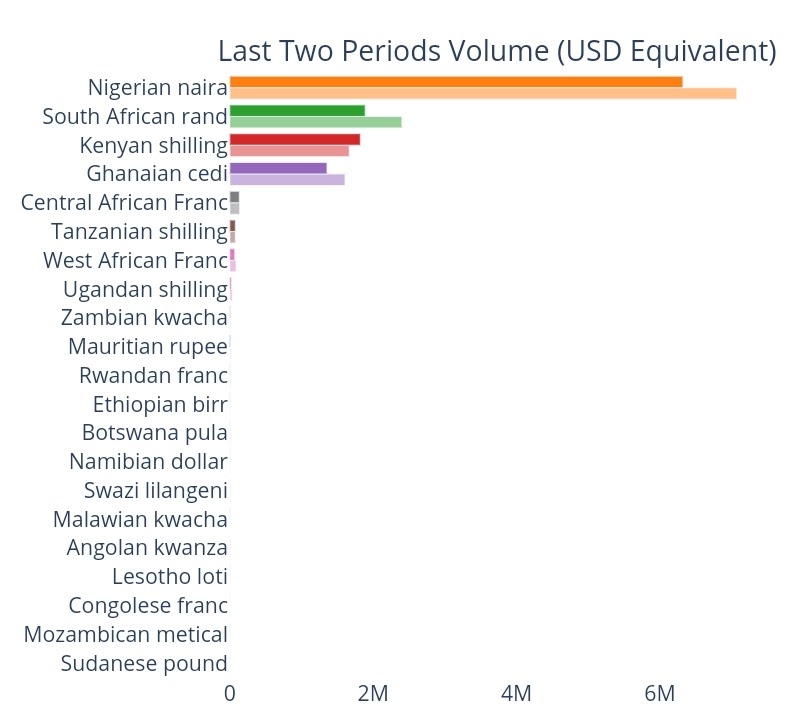 Continuing the trend of inconsistency, however, the Minister of Finance in South Africa distributed authority over crypto beyond the SARB. The Minister noted in mid-2017 in Parliament that “the National Treasury together with the SARB, [Financial Intelligence Centre], and [Financial Services Board] also established an Intergovernmental Fintech Working Group in December 2016, to develop an approach and revised policy stance towards fintech, including crypto-currencies.”

The country has been trying to affix a pro-crypto stance recently, as seen in a policy paper released by South Africa’s Intergovernmental Fintech Working Group, financial regulators in the country recommended “that crypto assets remain without legal tender status” in a roadmap outlining what could become the nation’s first comprehensive crypto laws.

Though many of the nations of sub-Saharan Africa have changed their attitude toward crypto recently, Zimbabwe has seen perhaps the most striking thaw in recent years.

The government banned crypto in 2018. The Reserve Bank of Zimbabwe instructed the private banks of Zimbabwe’s largest virtual currency exchange, Golix, to close its accounts and made Golix itself refund its customers.

Nonetheless, peer-to-peer trading of cryptocurrencies continues to grow in Zimbabwe as the country’s monetary policies falter. In mid-2019, the crypto rush in Zimbabwe reached such a high that rumors about Bitcoin’s price reaching a 600% premium began to spread.

In its monetary policy statement from February, the Reserve Bank of Zimbabwe revealed that its focus was on stabilizing its currency. Having suffered massive hyperinflation that peaked in 2007, the bank appears intent on eradicating the volatility of its exchange rate through the establishment of a currency stabilization task force. According to the RBZ, exchange rate stabilization will result in a corresponding decrease in inflation, thus leading to significant economic recovery for the country.

Consequently, Zimbabwe has made somewhat of a U-turn in its crypto policy. A local news source reports that the RBZ is reportedly developing a regulatory sandbox for cryptocurrency companies in the country.

Other parts of Africa

For other parts of sub-Saharan Africa, the situation seems to be pretty much the same. As regulators take their time to wrap their heads around this technology and how its implementation can influence the dynamics of their economic scene, citizens are seeing it as a haven for reasons ranging from remittances to hyperinflation.

As of last year, Ghana’s Securities and Exchange Commission confirmed that cryptocurrencies were still unregulated, issuing a public warning to investors in March 2019. Meanwhile, the regulatory space for cryptocurrencies in Kenya is currently nonexistent, with only a warning from its regulator for individuals and organizations to steer clear of transacting in digital currencies.

What the future holds for Africa

For the most part, the neutral regulatory stance on crypto in most countries within sub-Saharan Africa is due to a lack of education. However, it appears that this will not remain so for much longer. The level of interest from its citizens is growing. Beyond the need to hold cryptocurrencies for speculative reasons, Africa seems to be the region with the greatest need for cryptocurrency use cases. This increasing demand will play a key role in hastening regulation across the continent. With Africa’s most populous country, Nigeria, newly involved in the space, we may be about to witness a cascade of regulation from other parts of sub-Saharan Africa.

Alo Kingsley is a content writer with 4+ years of experience in writing with the blockchain and cryptocurrency niche. He first discovered Bitcoin in 2016 and has been passionate since then about various ways Blockchain can help Africa.

VCs don’t understand that Cardano has a community: Charles Hoskinson