A recent report by ARK Investment Management LLC presents a strongly bullish case for Bitcoin’s (BTC) future value. The group projects that Bitcoin’s network capitalization will rise to $1-$5 trillion over the next five to ten years. The asset manager argues that Bitcoin offers one of the most attractive risk to reward ratios and should be included in well-diversified portfolios.

However, Blockstream CEO Adam Back believes that the estimation is “conservative” and Back suggested that Bitcoin could rally to a “$1 trillion market cap within 2 years” or probably sooner, implying that each Bitcoin will be worth $50,000.

Other than buying and holding Bitcoin for the long-term, some aggressive traders add leverage through Bitcoin options as it allows them an opportunity to lock in greater gains with a fixed risk if proven correct.

As more institutional investors enter the crypto space, the liquidity in the options market is likely to increase further. The Bitcoin options open interest has been increasing over the past few months, and it hit an all-time high of $2.14 billion on Sep. 24, which shows increasing participation from traders.

While analysts have painted a rosy long-term picture for Bitcoin, what does the short-term project? Can the crypto markets resume their up-move, or will higher levels attract selling by the bears?

Let’s analyze the charts of the top 10 cryptocurrencies to find out.

Bitcoin is currently trading inside a symmetrical triangle, which suggests that both the bulls and the bears are not clear about the next directional move. The big question is when will the breakout happen and which direction will it take. 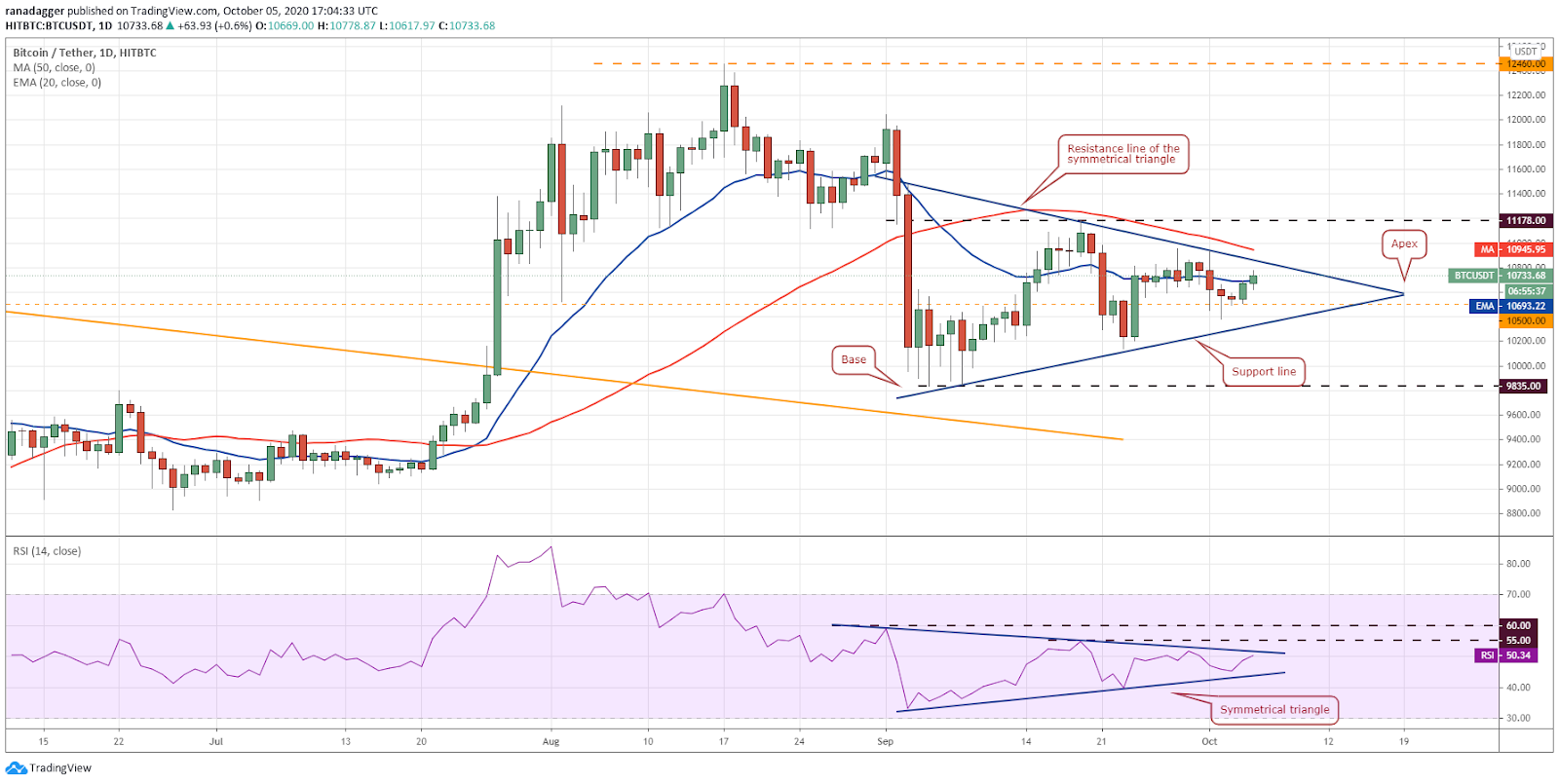 The BTC/USD pair has reached about three-fourths of the distance from the base of the triangle to the apex. Ideally, a breakout should happen within the next few days and both the bulls and the bears will attempt to dominate proceedings.

The flat 20-day exponential moving average ($10,693) and the relative strength index close to the midpoint suggests that it could be anybody’s game.

In a triangle, the price moves between the support line and the resistance line. After the bounce off the support line on Oct. 2, the bulls may attempt to push the price above the triangle. If they succeed, the pair could start an up-move with a target objective of $12,460.

However, if the breakout fails and the bears sink the price below the support line, then a drop to $9,835 would be on the cards. The next few days are critical as the pair could start a new trending move.

Ether (ETH) had turned down from the downtrend line on Oct. 1 but the bears could not capitalize on the weakness and sink the price to the $308.392 support. The long tails on the candlesticks from the start of the month show accumulation by the bulls at lower levels. 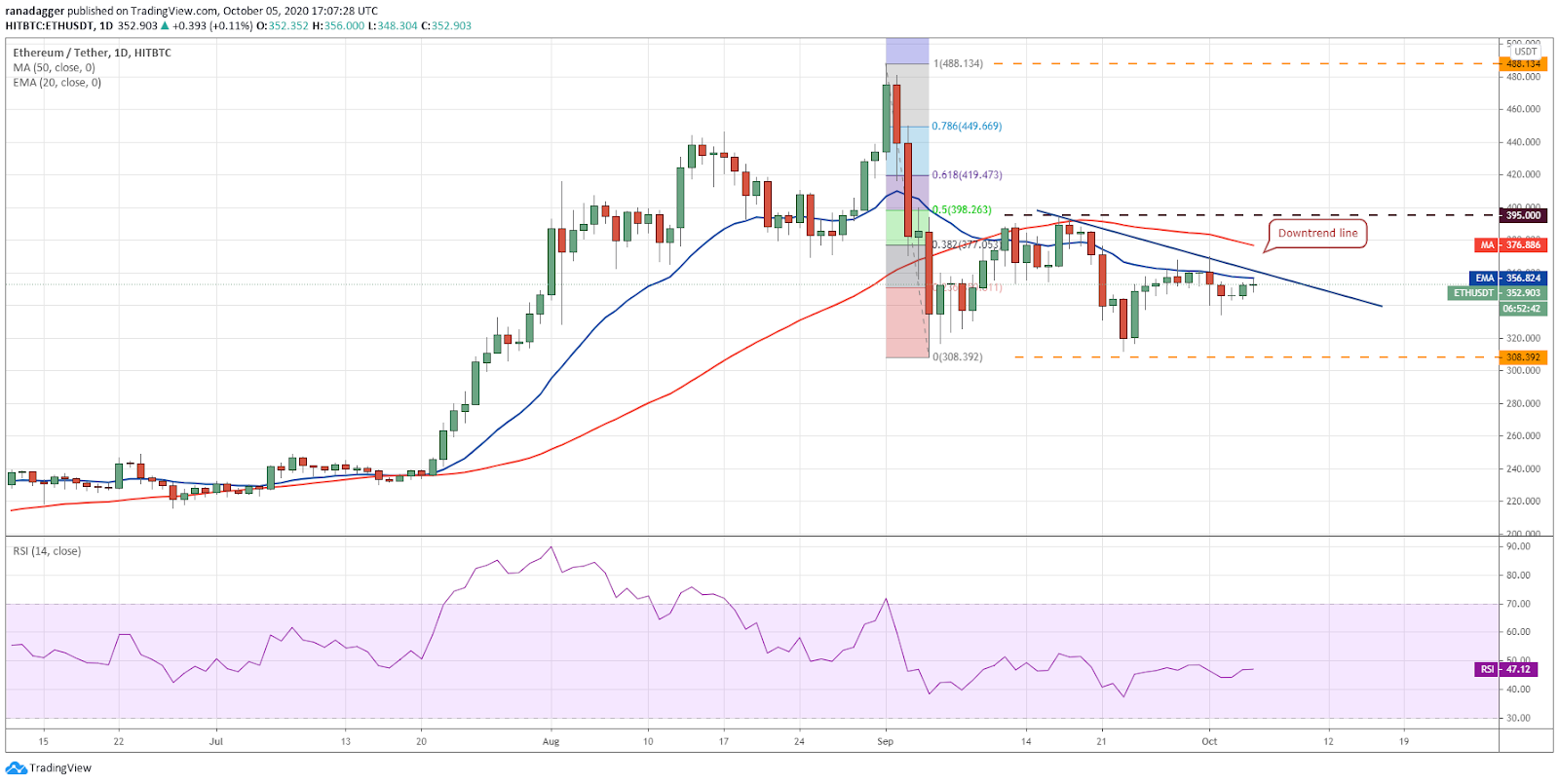 The bulls will now attempt to push the price above the downtrend line and if they prevail, a move to the 50-day simple moving average ($376) or even $395 is possible. A break above $395 may signal the resumption of the uptrend.

However, the bulls are unlikely to have an easy ride as the bears will mount stiff resistance at overhead resistance and the 50-day SMA.

If the ETH/USD pair turns down from the downtrend line, the bears will once again try to sink the price to $308.392. A break below this support may start a deeper correction to $240.

The failure of the bears to sink XRP below the $0.2295 support on Oct. 2 and 3 attracted aggressive buying from the short-term traders who pushed the price above the 20-day EMA ($0.242) and the downtrend line. 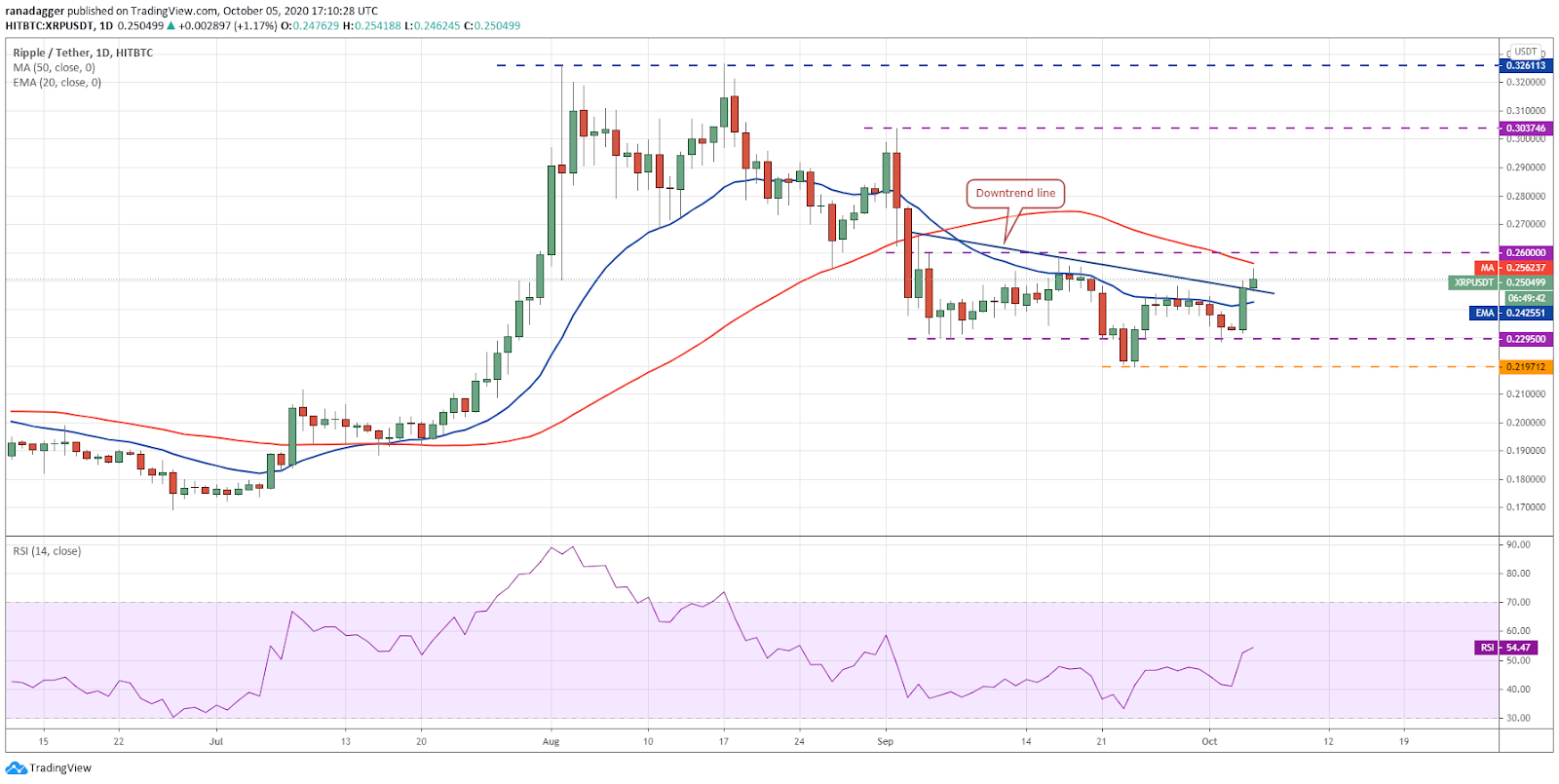 The flattish 20-day EMA and the RSI in the positive territory show that the selling pressure has reduced. If the bulls can capitalize on this advantage and push the price above $0.26, the XRP/USD pair could rally to $0.303746.

However, the bears are unlikely to give up easily. They are currently attempting to stall the up-move at the 50-day SMA ($0.256). If they can sink the price back below the downtrend line, it will suggest that the current breakout was a bear trap. 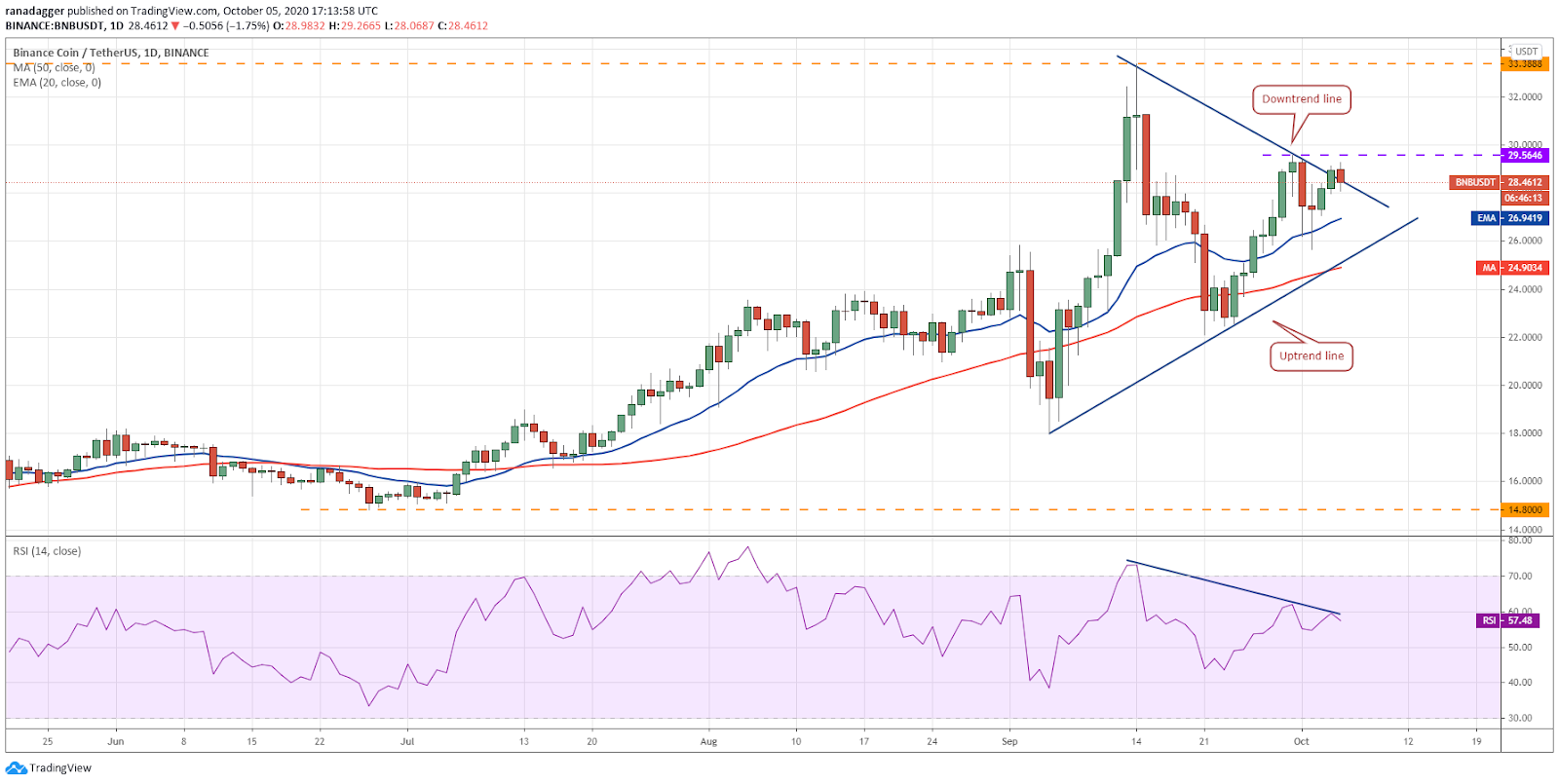 The bears are currently trying to pull the price back below the downtrend line and if they succeed, the BNB/USD pair could drop to the 20-day EMA.

A sharp rebound from this support will confirm that the bulls are buying on dips, while a break below it will signal near-term weakness.

However, the rising moving averages and the RSI in the positive zone suggest that the bulls have the upper hand.

If the pair rebounds off the downtrend line, it will suggest strength and increase the possibility of a break above the overhead resistance at $29.5646.

The bulls purchased the lows on Oct. 2 but they have not been able to sustain the buying at higher levels. This suggests that the bulls are hesitant to buy Bitcoin Cash (BCH) near the stiff resistance of the 20-day EMA ($225) and the downtrend line. 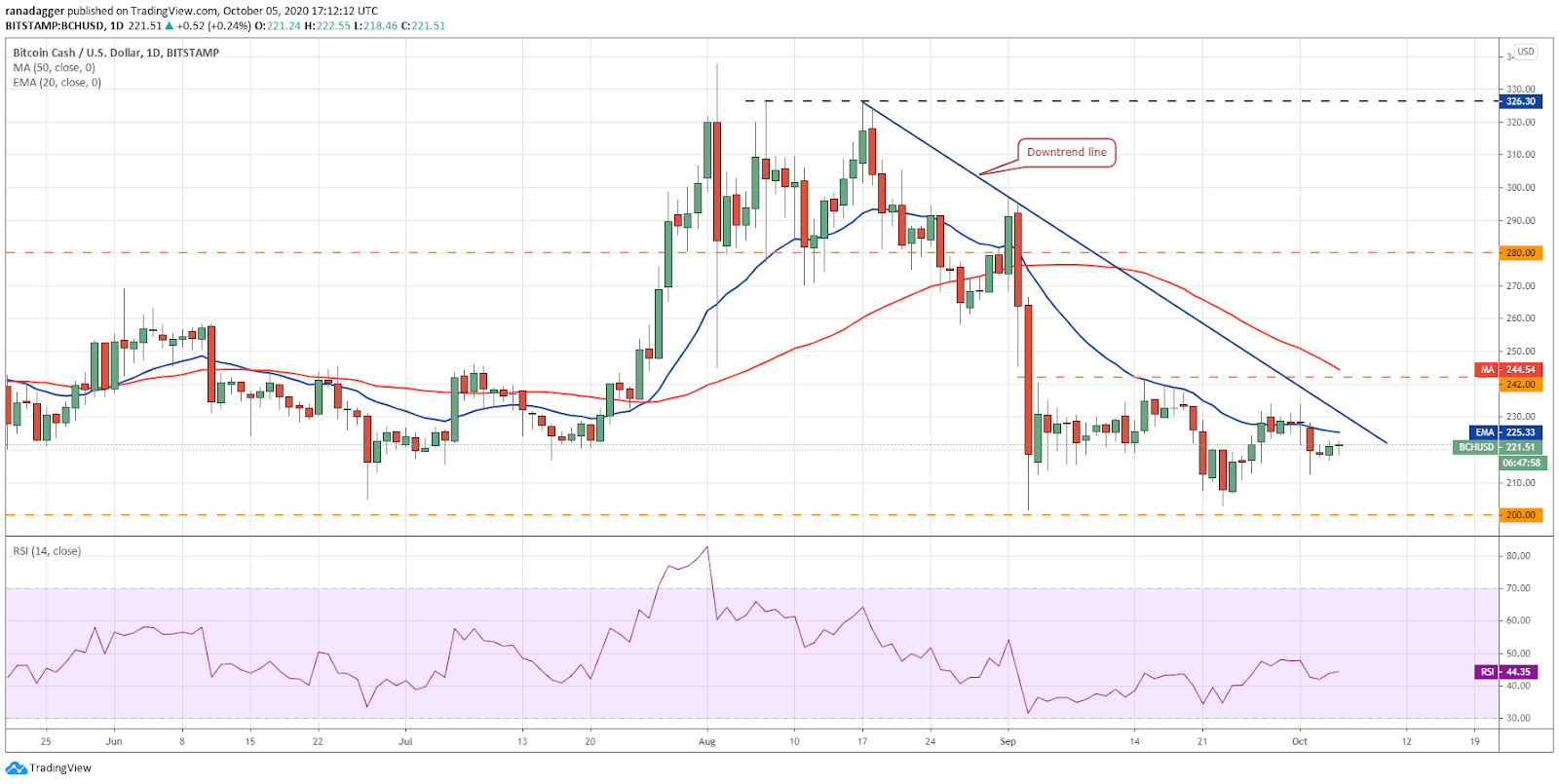 If the bulls do not push the price above the downtrend line within the next few days, the bears will again attempt to sink the BCH/USD pair to $210.

The downsloping moving averages and the RSI in the negative territory suggest a slight advantage to the bears.

However, if the bulls overcome the selling and propel the pair above the downtrend line, a rally to the 50-day SMA ($244) is possible. This level could act as a stiff resistance but once crossed, the pair may rise to $280.

The rebound off the $3.90 support in Polkadot (DOT) lacks strength, which shows that the bulls are in no hurry to buy at the current levels because they may not be confident that the correction has ended. 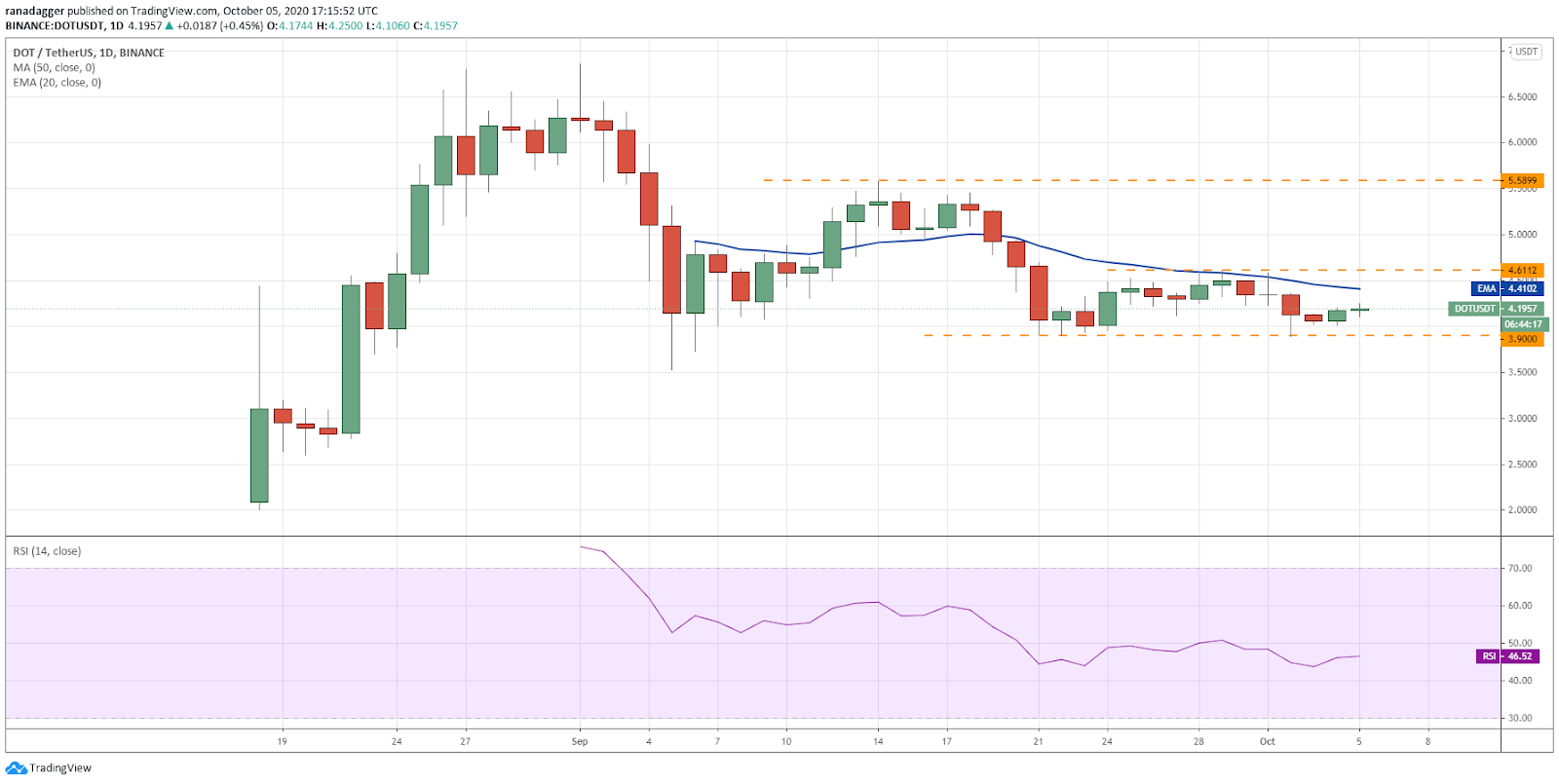 Another possibility is that the bulls buy on dips to $3.90 and the bears defend the resistance at $4.6112. Currently, all options are open, hence, traders may wait for a trending move to start before placing large bets.

Chainlink (LINK) is attempting a relief rally from $8.7975 but the rebound lacks strength, which shows low conviction among the buyers to accumulate at current levels. 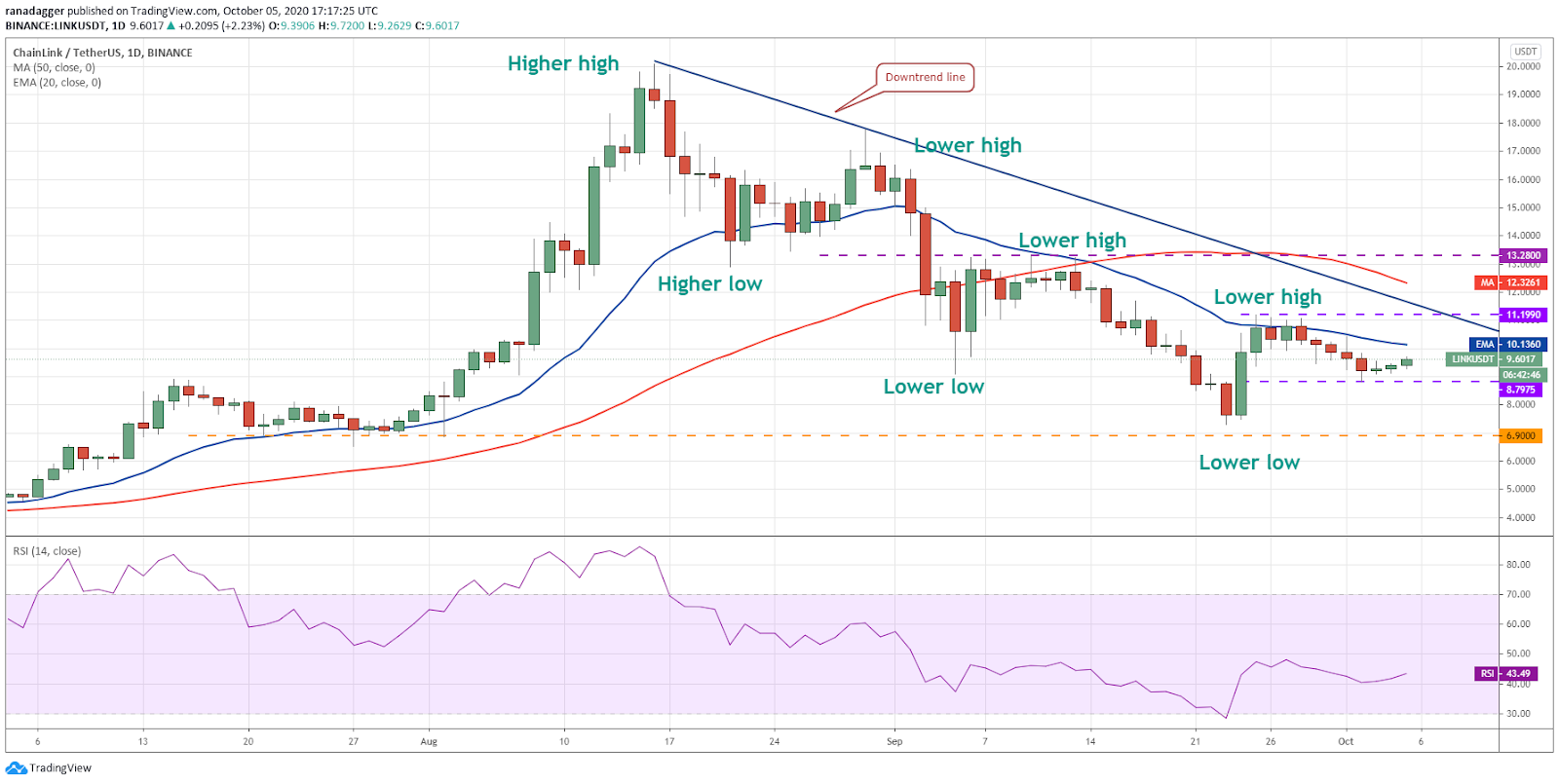 If the momentum does not pick up, the LINK/USD pair might again turn down from the 20-day EMA ($10.13). Such a move will suggest that bears continue to sell on minor rallies.

A breakout of the 20-day EMA will be the first sign that the bears might be losing their grip and a break above the downtrend line could signal a possible change in trend.

The bulls are defending the $0.144743 support but the rebound from the current levels could again face stiff resistance at the 20-day EMA ($0.153) and then at the downtrend line. If Crypto.com Coin (CRO) turns down from either level, the bears will again try to sink the price below $0.144743. 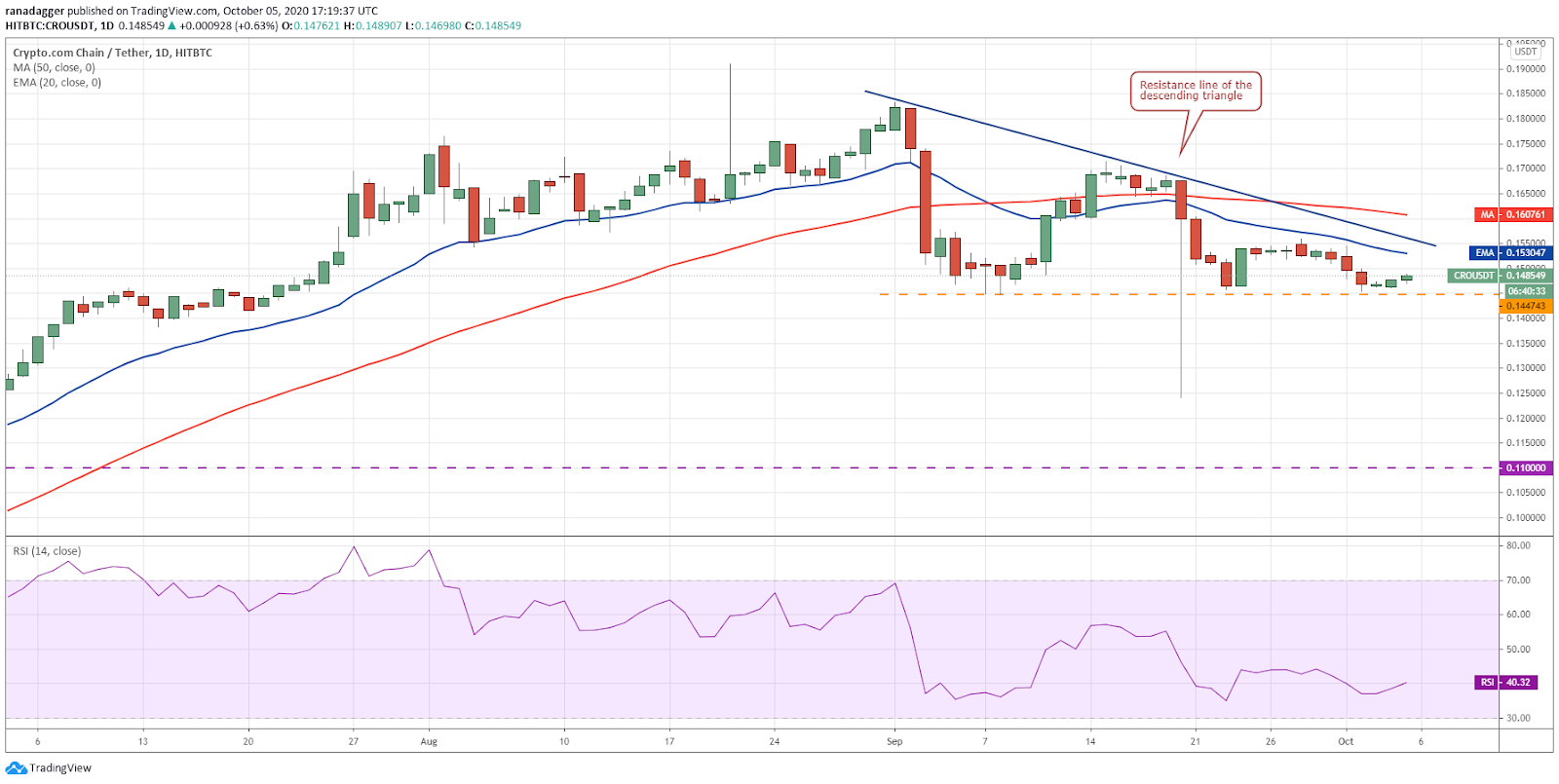 A breakdown and close (UTC time) below $0.144743 will complete a descending triangle pattern that has a target objective of $0.10607. The downsloping moving averages and the RSI in the negative territory suggest that bears have the upper hand.

Litecoin (LTC) has again reached the 20-day EMA ($46.66) where it is facing stiff resistance from the bears. However, the positive thing is that unlike the previous occasions on Oct. 1 and 2, the altcoin has not witnessed a sell-off. 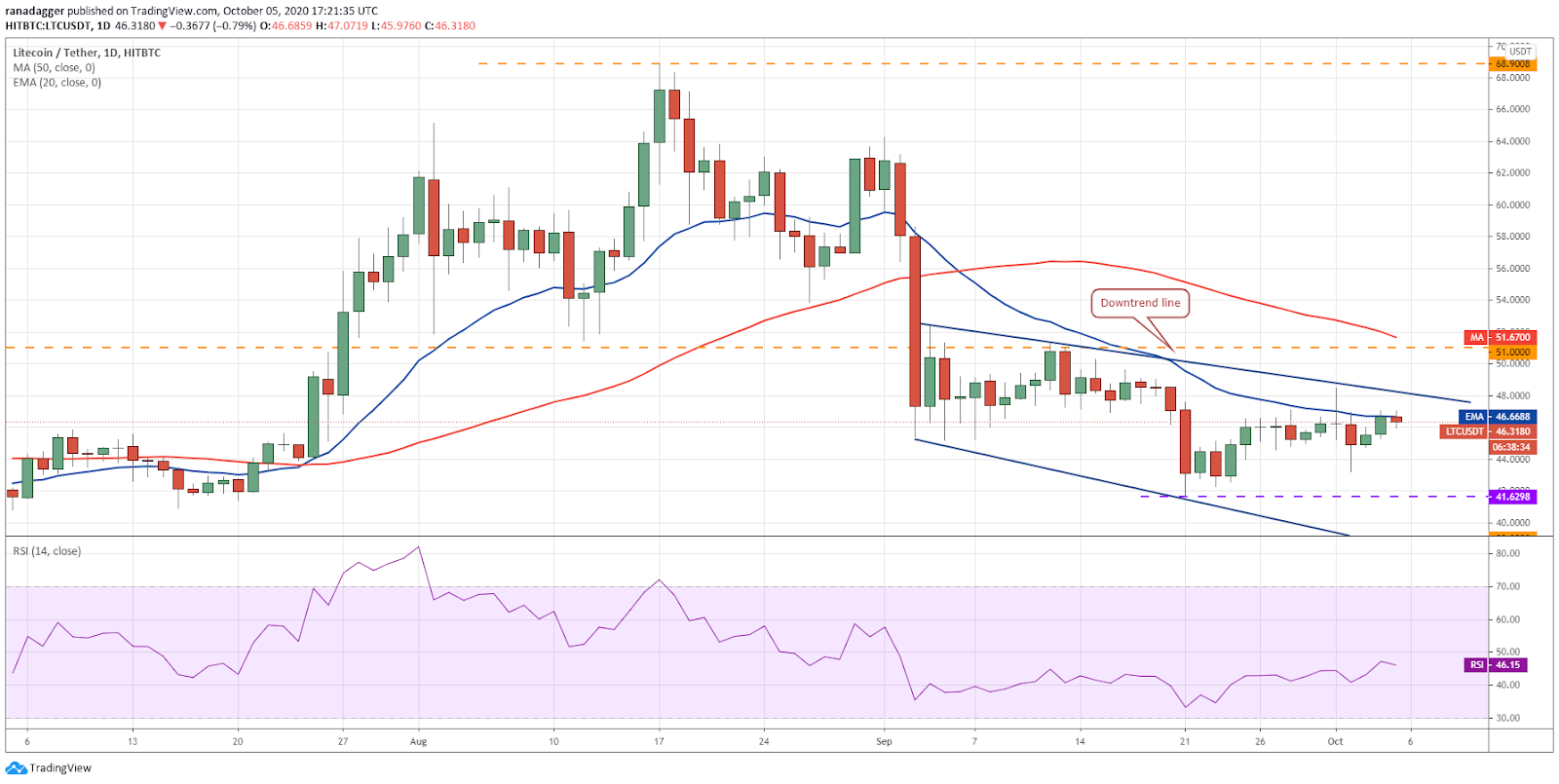 If the LTC/USD pair does not lose ground, the possibility of a move to the downtrend line increases. The bears may try to stall the relief rally at the downtrend line but if the bulls can push the price above it, the pair could move up to $51.

The 20-day EMA is flattening out and the RSI has risen above 46, which suggests that the selling pressure has reduced.

Contrary to the bullish assumption, if the pair again turns down from the current levels or the downtrend line, the bears will try to sink the price below $41.6298. If they succeed, the pair could drop to the critical support at $39.

Cardano (ADA) is currently facing resistance at the downtrend line but the positive thing is that the bulls are attempting to sustain the price above the 20-day EMA ($0.095). If they succeed, the possibility of a breakout of the 50-day SMA ($0.103) increases. 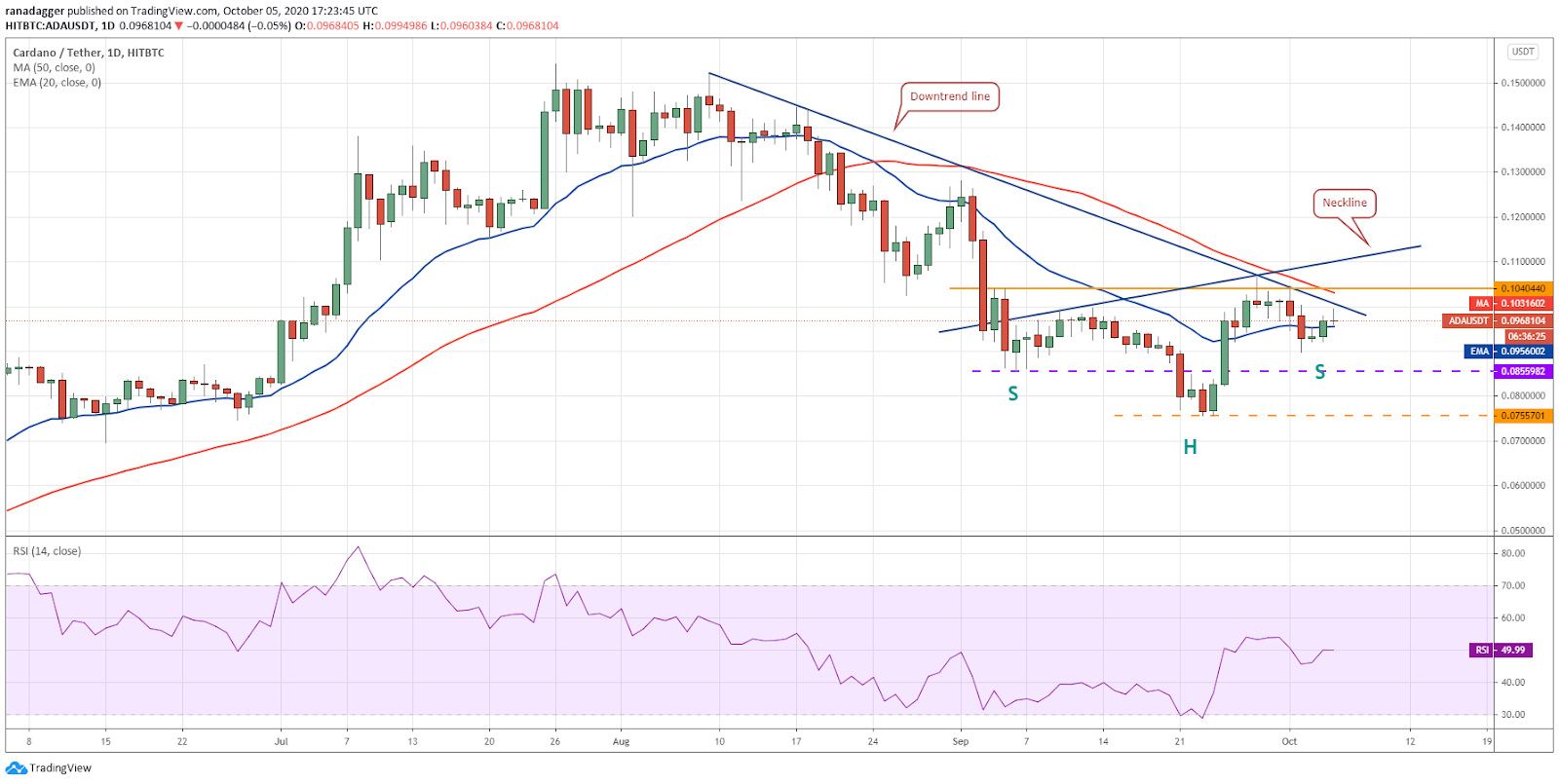 The 20-day EMA has flattened out and the RSI has risen to the 50 level, which suggests that the bears are losing their grip.

The ADA/USD pair has also formed an inverse head and shoulders pattern that will complete on a breakout and close above the neckline. This bullish setup has a target objective of $0.1331.

This positive view will be invalidated if the pair turns down from the current levels and breaks below the $0.0898–$0.0855 support zone.

The views and opinions expressed here are solely those of the author and do not necessarily reflect the views of Cointelegraph. Every investment and trading move involves risk. You should conduct your own research when making a decision.